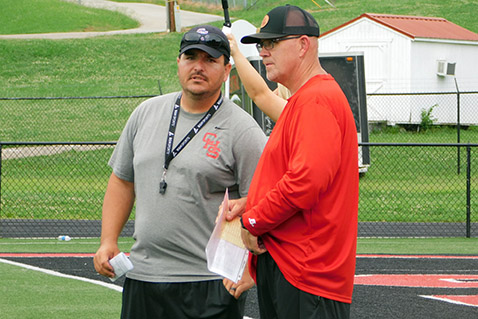 The strength of Central High’s football team this season will be “establishing the run and stopping the run” says Head Coach Nick Craney.

Junior running back Frank Johnson IV, a powerful 5-9, 225-pounder, is expected to take care of the first part. “He’s always been a big kid, but he has gotten a lot stronger this off-season,” said Craney.

“Physically, he is dominant. He’s a load to tackle. He’s got great vision, but I think a lot of his success comes from understanding what the (blockers and defenders) around him are doing. That gives him that little edge when he’s running the football.”

Johnson was very impressive last season as a sophomore and his return will lead the way for the Bobcats’ offense, which will have a new quarterback. Rising senior Tre Lyons and junior Sam Myers currently are battling for the starting job.

Lyons (6-1, 185) started at strong safety the last two seasons and will continue to play on the defensive side of the ball, no matter how the QB position shakes out. Myers (5-11, 165) was the JV quarterback last year.

“We feel really good about the two guys that are competing now,” said Craney. “It’s a situation where either of those guys can be successful and we’re trying to evaluate and figure out which one of them is going to give us the best chance to win ball games.”

Ryan Bolton, Central’s QB the past two seasons, graduated. Bolton also was an All-State punter, and that special team position will have to be filled, too.

Prior to Bolton directing the offense, quarterback Dakota Fawver helped lead the Bobcats to back-to-back Class 5A state titles in 2018 and 2019.

Trey Mitchell, who was the Bobcats’ quarterback in 2016 when they were the Class 4A state runners-up, has returned to his alma mater and is now the team’s new QB coach.

Central was a senior-laden team last fall and finished with an 8-4 record.

“Last year we had a lot of positive things happen,” said Coach Craney. “We were runner-up in the region and made it to the quarterfinals again. But in a couple of games that we didn’t win, in particular the region championship and the quarterfinal game, we weren’t very competitive.

“And so coming out of last year, the emphasis obviously has been on getting better, but also our goal and mind-set has been to be competitive in every game that we play.”

Even though Central had 24 seniors last season, Craney pointed out “there were a lot of guys that played last year that weren’t seniors.” So the cupboard is not as bare as some might think.

“We’re excited about what’s coming back and really excited with what this off-season has looked like,” Craney added. “The guys have been working hard and getting stronger and faster. We’re looking forward to a good 2022.”

Central has four full-time starters back in each of the offensive and defensive units plus several more that started one or more games last season.

Chase Adams is the top returnee on defense. “He’s going to be playing an outside linebacker position, which is very similar to what he was doing last season as our weak side defensive end,” said Craney. “He’s also going to be playing some as our H-back or tight end type position. He’s been very explosive on the offensive side as well. So we are very excited of what he is bringing to the table.”

Jaylon Sanford, who started at offensive guard last year, is probably the team’s best interior defensive lineman and “most explosive,” said the coach.

Brody Cranford will start at linebacker and Dylan Greer at defensive end and offensive tackle.

Other projected starters include Josh Purcell at receiver and free safety and Cooper Wyatt at offensive tackle. Drew Brown will play guard or center and is “doing a good job from a leadership standpoint,” said Craney.

Kole Hughes returns as the place-kicker and also may be the new punter.

Central has had significant changes in its coaching staff. Nathan Simbeck, the offensive coordinator the past two seasons, was hired by former Alcoa coach Gary Rankin at Boyd Buchanan, which is closer to where Simbeck and his wife are from.

Alex Roberts from Hoover High in Alabama has joined the Central staff and is the run game coordinator and running backs coach.

Craney continues to direct the defense.

Central will open the season at Greeneville on Aug. 19. The Greene Devils, 12-1 and one of the state’s top teams, handed the Bobcats a 42-17 loss in the season opener in Fountain City last year.