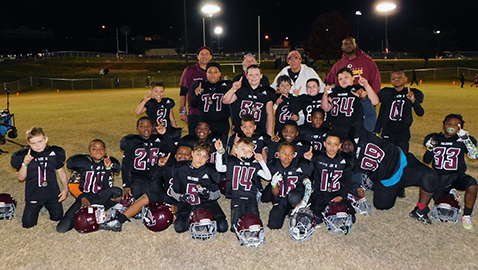 Jones, a former longtime local youth coach who now is the quarterbacks coach and offensive coordinator at Powell High, went on to call it the “largest youth football tournament in the United States” based on the most teams.

The tournament is played annually the weekend before Thanksgiving.

“According to Visit Knoxville, the local tourism group, it’s an over $5 million economic impact to the local community,” said Jones.

Despite the pandemic, this year’s event attracted 285 teams from 18 states and would have had more.

“Over 300 registered,” said Jones, “but 35 to 40 teams had to cancel the last week before the tournament because of COVID-19 related reasons.”

A youth football tournament in the United States, said Jones, is generally considered “big” if it has 70 to 90 teams.

South Dakota was represented for the first time at this year’s Battle in Rocky Top tournament.

When the first tournament was held, all of the games were played on fields in Knox County. Because of its growth, however, Knoxville now does not have enough hotel-space to accommodate all of the teams, said Jones, so about half of the 23 fields used this year were outside of Knox County.

The fields at John Tarleton Park and Tommy Schumpert Park were used in Knox County plus the Knoxville Catholic and Webb high school fields.

“The Battle in Rocky Top has really helped make football more competitive here in Knoxville at the grassroots level,” said Jones, who led the Fulton eighth grade program for 15 years (2003 – 2017) before getting into high school coaching.

“Prior to the start of the tournament in 2006, there were only a few teams in our area getting to play teams from other states. Many teams – local, state-wide and from other states – now use this as their big year-end measuring stick.

“There’s also been some really good players come through this tournament and many have went on and played in the SEC, ACC, Big Ten and other college football conferences.

“Some of the country’s best youth football players have come through Knoxville to play in the Battle.”

After taking many of his teams to play in tournaments out of state for years, Jones said he and his wife talked about it and decided to start a tournament in Tennessee.

“It began with the Kickoff Classic, a preseason tournament that we still have although it’s not as big, and I kept hearing the same message from coaches, ‘If you do one at the end of the season, let me know.’ After hearing about 15 comments like that, I said let’s do some in November too. So we put it together and it took off like wildfire.”

With the Battle in Rocky Top now as big as it is, Jones said he has probably close to 120 people who work it. “About half are staff and the rest are officials from Knoxville, Nashville, Chattanooga, Georgia, Kentucky and North Carolina.

“It’s still hard to put on a tournament this big, but it’s gotten a lot easier. Having taken my teams and played in many tournaments around the Southeast, I thought I knew a lot about it when we first started, but I found out quickly I knew very little and had to learn a lot about it.”

A couple of big names who played in the ‘Battle’ and are now in the NFL include University of South Carolina product Deebo Samuel, a San Francisco 49ers wide receiver; and former Ohio State standout Mike Weber, a Green Bay Packers running back.

The recent No. 1 pick in the NBA draft, Anthony Edwards, who was chosen by the Minnesota Timberwolves, played in the ‘Battle’ with the Atlanta Vikings.

Even the player “who threw the shoe” in college football this season played in it. That would be Florida Gators cornerback Marco Wilson, who tossed an LSU player’s shoe down field and drew a costly unsportsmanlike conduct penalty that led to the Tigers’ winning touchdown.

Marco’s older brother Quincy, now a cornerback with the New York Giants, also played in the ‘Battle’ with the WPPO Wildcats of Fort Lauderdale.

“All of the local stars have played in it over the years,” added Jones, “starting with Todd Kelly Jr.” That list also includes Amari Rodgers, who currently is a standout wide receiver at Clemson.