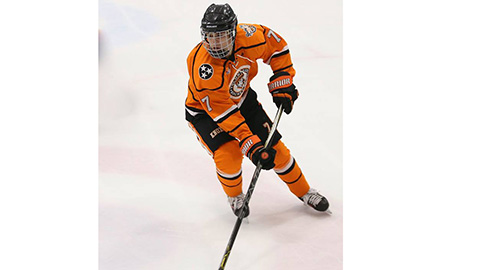 A former Knoxville Amateur Hockey Association High School League star has taken his game to the college level and he’s having success both on the ice and in the classroom.

Maine, a junior defenseman for the Ice Vols, was one of five Tennessee players to be named to the ACHA’s Academic All-American Team.

During his high school day, Maine played for the Knoxville Knights, a team comprised largely from Maryville, Hardin Valley and other communities. He was coached by his father, Greg, and played with two of his brothers.

Greg is no longer coaching high school hockey in Knoxville but he has other children playing hockey. And another son, Joe, is a football player for Farragut High School.

Josh, an industrial design major who hopes to one day design athletic apparel and shoes or cars, was home schooled and hockey has a huge impact on his life.

Josh has always loved hockey and basketball. He didn’t quite take to football, but with Joe on the gridiron for the Admirals these days, Josh is doing what any big brother would do, supporting a family member.

“I don’t know a lot about football, but Joe enjoys it and I’m happy for him,” said Josh, who enjoys watching basketball and hockey. He watches professional basketball but has a limited allegiance to NBA teams, while pulling for the Philadelphia Flyers and Nashville Predators of the NHL.

“I love the Nashville Predators, of course,” he said. “I lived in Pennsylvania for a while, so I like the Philadelphia Flyers. Basketball is tough, because I pull more for players than I do for teams. I like Russell Westbrook (of the Houston Rockets), so I like the Rockets and the Golden State Warriors.”

The 2019-2020 campaign was Josh’s first full season with the Ice Vols. He didn’t play as a freshman and played part-time as a sophomore.

“It’s hard to keep up with your school work, so I didn’t play my freshman year and I played off-and-on during my sophomore year,” Josh said. “And I have to work my regular job too.”

He also works at the Target in Turkey Creek.

Maine is one of a handful of former KAHA players currently playing for Tennessee’s hockey club, which was formed in 1966 and boasts being the oldest college hockey team in the South.

Others local products are playing for the Ice Vols, who compete in the ACHA and are a part of the South Eastern Collegiate Hockey Conference.

Maine played against most of those guys in high school.

“It’s funny. A lot of the guys I play with now, I played against them in high school and in travel hockey,” he said. “I love playing with my buddies from school and wearing Tennessee’s colors,” he said.

But hockey, as a game, has taught him about much more.

“I always wanted to be a leader and be a captain, so hockey has helped me in everyday life,” Josh said. “It helps me in my job.”