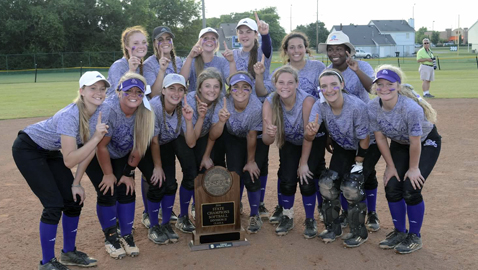 The King’s Academy softball team was on the brink of elimination.

With the scored tied and one out in the bottom of the seventh inning, Friendship Christian had the winning run on third base and its clean-up batter at the plate in the Division II-A softball finals May 27.

If that run scores, the Lady Lions from Seymour would have finished state runners-up to Friendship Christian for the second year in a row in the TSSAA Spring Fling in Murfreesboro.

TKA Coach Marc Weekly had intentionally walked the previous batter to load the bases and set up a force-out opportunity at each base for his defenders.

“I called for a screwball,” said Weekly. “We wanted to get the pitch in on the batter’s hands, hoping for a ground ball on the left side of the infield.

“Sometimes you have to play the odds.”

Riley Walker got enough of her bat on the ball to keep it off the ground, but freshman shortstop Haydyn Jenkins was shaded over just enough to catch the line drive and throw to first for an inning-ending double play.

With what must have felt like new life, The King’s Academy girls came in and scored three runs in the top of the eighth and won the game 6-4. Freshman Katelyn Norris sparked the eighth inning fireworks with a solo home run down the left field line. Senior Heather Foreman went the distance for the mound win.

The Lady Lions then beat Friendship Christian 7-5 in the “if necessary” game for the school’s first-ever TSSAA state team championship.

In just its third season of having a softball program, The King’s Academy finished with a 41-6 record. Weekly started the program in 2014 after having been a volunteer assistant coach at UT, where his father Ralph Weekly and Karen Weekly are still co-head coaches. Both Ralph and Karen Weekly attended this year’s state tourney.

Marc’s daughter, Regan, was a freshman second baseman on the team, and his niece, Taylor Weekly, was a junior captain and third baseman.

“We start five freshmen and they play like veterans,” said the coach. “Taylor was an incredible leader all year and especially in the state tournament. Both of our pitchers (Foreman and senior Haven Taylor) did a great job and kept us in every game while our bats heated up.

The Lady Lions had a plan and a slogan.

“We talked all year about enjoying the journey and not the destination,” said Coach Weekly, “that (when) others come to beat us, we come to Be us.”

Weekly, who also is Director of Athletics/ Development at The Kings Academy, added: “The TKA family and inner circle are second to none and we are thrilled to be able to bring this home to the TKA community. It’s an honor as well to bring the first state championship as a team back to the city of Seymour.”