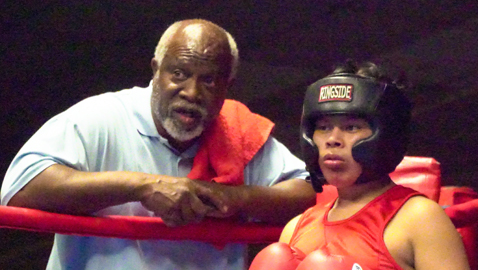 The boxing ring has been Judge Hill’s classroom for 45 years.

With the contributions he has made to the local Golden Gloves program and the lives he has touched, “Ace” Miller has to be looking down smiling.

Miller, who passed away in 2012, took control of Knoxville’s chapter of the national Golden Gloves organization back in 1971.

“It’s something that grows on you,” said Hill during a break at the Southern Golden Gloves tournament Thursday night. “You’ve got the fellow that teaches golf or basketball. Teaching boxing has become second nature for me.

Also a labor of love, some have noticed.

On opening night of the Southern last week, Hill did more than teach and coach. He spent time lacing up gloves before the boxing began. He even was the referee in the final open division bout of the night.

His satisfaction in working with the youngsters?

“Just watching them grow,” answered Hill. “And my motto is: I don’t care if you win or lose, it’s what we learn. That’s been our philosophy.”

Hill himself was an athlete at Fulton High, Class of 1969. He ran on the track team, boxed and played on the school’s ice hockey team.

“My career as a boxer was short.”

But he has enjoyed plenty of success as a teacher and coach in the sport.

“I was part of the John Tate team years ago,” he said. “I’ve coached several other pros and good amateurs as well.”

Knoxville’s Big John Tate, who was trained by Ace Miller, was an Olympic bronze medalist and won the WBA heavyweight championship in 1979 against Gerrie Coetzee in South Africa.

Hill is one of six coaches in the Knoxville Golden Gloves program.

“Each coach gets a group of kids and it’s up to each coach to keep his group together,” he said. “I may have 20 on my list.”

The status of the program?

Hill said the news about the effects of concussions in contact sports in recent years hurt boxing.

“But now … I think it’s a pretty safe sport,” he said. “The equipment that’s been made by the manufacturers … the gloves and headgears are safer.”

Hill spends four nights a week year-round at the gym. Outside of boxing, he has been with AT&T for 45 years.

“Judge Hill is working very hard with a great group of kids that is growing up in the program,” said Tracy Miller-Davis, who became general manager of the program and the arena after her father died. “He is so super dedicated to his love of boxing and coaches from his heart.  It’s all about the kids for him.”