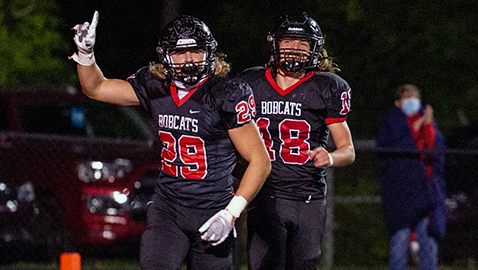 Kalib Fortner broke out on the prep football scene as a sophomore two years ago and capped the 2018 season by being selected the Most Valuable Player in Central’s Class 5A state championship win at the BlueCross Bowl in Cookeville.

Over the next two seasons, the Bobcats’ outside linebacker continued to play the game with great passion.

One might say he never pushed the “cruise control” button. Instead, he pushed the pedal to the metal.

For his hard-hitting style of play, Fortner has been selected the Player of the Year on The Focus / Coaches’ 2020 All-Knox County team. He received six votes in the balloting.

Kalib’s brother, Liam, a senior wide receiver and strong safety who also ran a lot out of the wildcat position this season, finished runner-up with three votes. Both have committed to sign with Army.

“Throughout Kalib’s career at CHS he has been tenacious about how he approaches every part of being successful,” said Central Head Coach Nick Craney after learning Kalib had been voted the award.

“From committing himself to working extremely hard in the weight room to develop his body to studying and learning our defense and his position inside and out, he also has been determined to succeed in the classroom and in service to our school and community. I am so proud of all he has accomplished on and off the field in his time at Central.

“However, in this crazy 2020 season and my first year as Kalib’s head coach, I am most grateful for his leadership,” added Craney. “He is the type of young man that understands what it takes to be successful and is unashamed of holding all of those around him accountable to that standard of success.”

Kalib, who added 25 pounds of muscle during the off-season, also saw action as a tight end this year.

Fortner is one of three finalists for the TSSAA Class 5A Mr. Football award, which will be announced Tuesday.