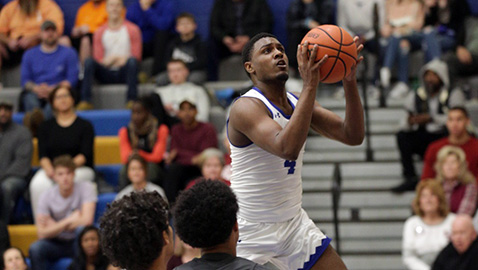 Karns made a Cinderella-type run through the District 3-AAA basketball tournament but couldn’t wrap up the title.

The sixth-seeded Beavers, coming in with a 10-15 record, posted wins over Campbell County, No. 3 seed Anderson County and No. 2 seed Central before seeing a nine-point lead over top-seeded Oak Ridge slip away down the stretch in the finals Wednesday night at Karns.

The Wildcats’ full-court press produced several turnovers as they rallied for a 75-65 victory in the final 5 minutes, 31 seconds. Poor free throw shooting also was costly for Karns.

“Their press was effective,” said veteran Karns Coach Lee Henson. “The experience of their guards was the key. They’re used to it and they’ve been in this limelight. They got after us and we got a little excited and threw the ball around.”

Playing four games in the tournament was taxing, added Henson.

“You could tell at the end, we were spent,” he said. “It’s not an excuse. We got beat, but that’s part of it. Of course, Oak Ridge has been here many times and they are a good team.”

Karns was led by Mark Vance, who was tough to handle inside and scored 21 points. Teahzjawon Hodge-Harper chipped in 17 and Caleb Keeter 14.

The Beavers (13-16) were scheduled to host Maryville in the Region 2-AAA quarterfinals Saturday, while Oak Ridge (24-5) was to entertain West.

“We didn’t really have a choice,” said Green. “Karns played a heck of a game. We didn’t play great and they had a lot to do with that. Our press obviously turned the tempo. Smith finally decided to play there in the last six or seven minutes. His 26 points in the fourth quarter is unheard of.”

The rattled Beavers were outscored 24-5 over the last five minutes.

Karns committed 18 turnovers in the game, while Oak Ridge had eight.

Vance said “their lateral quickness” is what makes the Wildcats’ press effective. “It was really how we executed against it. We had a lot of turnovers that we shouldn’t have. We weren’t moving the ball well.”

Seventy-four free throws were attempted, but neither team shot well from the line – Karns making 18 of 34 and Oak Ridge 23 of 40. Hodge-Harper connected on only six of his 19 attempts.

Coach Green complimented Karns’ tourney run. “They are always tough here on their home floor. I’ve got a lot of respect for Coach Henson. That was a tough one to lose, but I’m proud of our players. They didn’t quit. They kept battling. We found a way to win the game.”

CENTRAL FALLS: The 1-2 punch of Evan Winchester (22 points) and Jackson Garner (21) led No. 5 seed Clinton past Central 67-59 in the consolation game. The Bobcats got 17 from Tevon Summers and 14 from Sean Oglesby.

The Dragons (19-14) were to have played at Knoxville Catholic in the Region 2-AAA quarterfinals, while Central (16-12) faced District 4 champion Bearden.