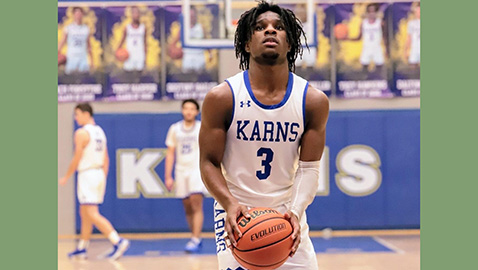 Karns’ Student-Athletes of the Year Trey Hawkins and Sarah Roberts have something in common. They were known for their offensive play on the high school level.

Hawkins was a quick and exciting player in football and basketball for the Beavers.

In the fall, Trey, a wide receiver, had 48 catches for 600 yards and six touchdowns.

He was the team MVP and also received first team All-Region 3-5A honors.

During the basketball season, Hawkins averaged 16.8 points per game for Coach Lee Henson’s Beavers. He was named first team All-District 3-AAA plus made the All-District tournament team.

“Trey Hawkins is a dynamic player on the football field and basketball court,” said Christopher Hartsfield, an assistant coach in football and boys basketball at Karns. “He has swift feet and a shifty body that allowed him to gain extra yards when he was carrying the football and easily get to the rim to score the rock. He is a great leader and teammate. Did I mention that he is also a great sprinter!”

Hawkins will continue his athletic career in football at the University of the Cumberlands.

Although soccer is not a high-scoring sport, Roberts was among the best in the state at putting the ball in the goal. The Lady Beavers’ forward striker ranked 11th in the state with 36 goals scored in her junior campaign and added 28 more as a senior last fall.

“She is definitely a great choice for this award,” said Karns Coach Jeff Monckton.

Sarah was a four-year starter and two-year captain. She also was an All-District 3-AAA first team honoree as a junior and senior and received the Offensive Player of the Year team award.

Roberts signed with Johnson University to continue her athletic and academic career.