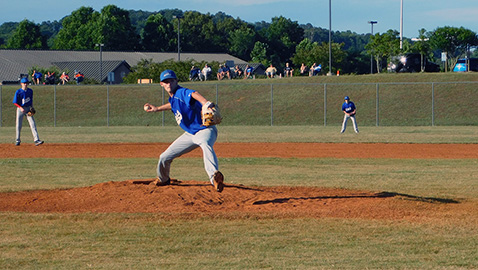 Knoxville Christian School baseball coach John Barry is delighted to see his team get to play this summer, although he’s been less than thrilled with the Knights’ results on the field.

“I think that overall, we would like to see more from our players,” Barry said after the Knights lost a 13-4 tilt to the Seymour Wildcats Thursday night at KCS. “This is a chance for our guys to get a chance to play and it’s a way for us to give our seniors one last send-off before they go off to college.

The summer league at Knoxville Christian features teams from Maryville, Fountain City, Harriman, Powell and Sweetwater tangling with the Knights.

Games are played on Mondays, Tuesdays and Thursdays at the KCS baseball diamond. And while the majority of those wearing Knights’ colors attend Knoxville Christian, Barry opened his team up to anyone who wanted to play.

But two Gibbs players, Spencer Hudson and Wyatt Davis are on the team along with Ty Hamilton (Tellico Plains), Tommy Behrens (Christian Academy of Knoxville) and C.J. York.

York is a product of York Institute and is a descendant of Alvin C. York, the World War I hero for whom the school is named.

In Thursday’s game against the Wildcats, the Knights took a 1-0 lead in the top of the first inning when York singled and later came home when a teammate was caught in a rundown.

Then things came unraveled for the Knights, who were plagued by wild pitches and errors. Sweetwater scored three runs in the first and four more in the second to take a 7-1 lead.

KCS pulled to within 7-2 in the top of the third frame when Ford scored on a wild pitch after drawing a leadoff walk. Ford, a catcher, will be an eighth grader at KCS when school resumes in the fall.

The Wildcats scored three runs in the bottom of the inning to extend their advantage to 10-2.

In the top of the fourth the Knights got a leadoff double from Carroll, who later scored on a Sweetwater error to make it 10-3.

KCS added its final run in the fifth when Merritt scored on a wild pitch. He reached on a single to open the inning. He stole second before taking third when Ford grounded out.

The Knights return to action today (June 22) when they play the Eagles at 4:30 p.m. The Eagles are comprised by student-athletes from First Baptist Academy in Powell and Barry said that the KCS summer league was the brainchild of he and FBA coach Jay Scarbro.

The Eagles will play the Bobcats (Fountain City) on Tuesday night at 7.