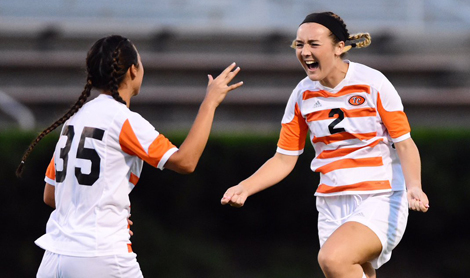 Kelly, a 2013 Karns High School graduate, had high hopes for her senior year in Greeneville. But those aspirations had to take a back seat when she broke her leg and possibly ended her season and her college soccer career.

But Kelly is a fast healer and she’s on the mend. And her collegiate soccer career may not quite be over just yet.

“My coach and I are hoping that I can make it back for the [South Atlantic Conference] tournament and I can play on the penalty kick unit,” said Kelly, who suffered the injury early this season after appearing in just three games. “That is my hope and that is my coach’s hope”

She knows that she’s facing a long road back if she is to appear in the conference’s postseason tournament. She had the option of a medical redshirt. After some consideration, she opted not to take that patch.

“I could’ve taken a medical redshirt but I decided not to do that,” Kelly said. “Sometimes, I think I should and that way I could do some more in school. But the opportunity to do my student teaching in Knoxville this spring is too good to pass up.”

Time will tell if Kelly can make one last return to the soccer pitch for the Lady Pioneers, but the support she’s received has left her at peace no matter what happens.

“At first when I was in the hospital, I was really down,” she said. “But I’ve that the support from my family, my teammates and my friends outside of soccer.

“My parents have always supported me but when I got hurt, my parents weren’t at the game. But as soon as my mom found out that I got hurt, she went to the hospital.”

Her dad Kevin was also there during her hospital stay and he passed on a few words of wisdom.

“He told me that I couldn’t feel bad because I gave it my all,” Kelly told The Focus. “He’s always been really positive.”

Kelly has had to deal with life without sports for the first time in nearly two decades. In addition to soccer, she’s also danced, played tennis and ran track and not playing soccer has left a void for her.

Kelly may be on the shelf for the moment but that hasn’t stopped her from being there for her teammates.

“I’m there to contribute in any way that I can,” she said. “I haven’t missed a practice and I just want to help out in whatever way I can.”

The injury has also taught Kelly a few things.

“I’ve learned not to ever take any opportunity for granted,” she said. “Sometimes, I look back and maybe see that there was a practice where I didn’t give my all and I regret it.

“If anything good came out of this, it was that I can concentrate more on school and not have the soccer pressure. I can also concentrate more on my work with the PSAAC (Pioneer Student Athlete Advisory Council). I’ve been on that since I was a sophomore and now, I’m a senior representative.”

Kelly hopes to become a kindergarten teacher and also said that she wants to coach soccer one day.