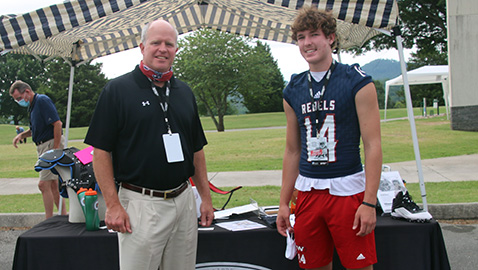 Members of the Knoxville Football Officials Association aren’t used to being applauded, but when it comes to the KFOA’s Scholarship Golf Tournament and Media Day, they deserve some praise.

It’s impressive how much money KFOA has raised over the years from its golf event to award scholarships to student-athletes connected with the football programs in its service area.

“We have awarded over $150,000 since its inception (in 1983),” noted Harold Denton, longtime official, TSSAA supervisor and leader in the KFOA.

It’s a year-long annual project the KFOA is very proud of.

“We are definitely the only officiating group in the state and maybe in the Southeast that’s giving back that much to schools we serve,” said Denton. “Yes, it is a huge philanthropic endeavor.”

The KFOA had a good turnout this year despite the coronavirus. “We had 21 teams – the most in several years,” pointed out Denton.

Recipients of the scholarship money can be players, managers or cheerleaders – anyone connected with the football program.

Over the years, Gatlinburg-Pittman and South-Doyle high schools have had 10 scholarship recipients each, followed by Sevier County (seven), Sweetwater (six), Bearden (five) and Farragut (five).

Records through Jan. 31, 2019 indicated there had been 83 scholarship recipients from 26 schools served by the KFOA. Two more tourneys since then increase those totals.

This year’s Media Day had a much different look due to the pandemic.

“Everybody wore masks and social distanced,” said Denton. “It went possibly better than we thought it would.”

A few schools this year were represented only by a coach and did not bring players to the event.

The 2021 KFOA Media Day and Scholarship Golf Tournament have already been set for July 9 and Denton put out an early call: “Need sponsors!”