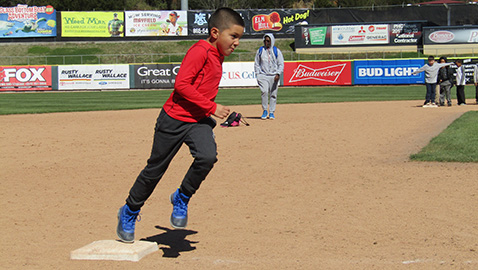 The sky was blue and the sun bright. Had it not been for a brisk, cool wind, it would have been a perfect day for being on a ball field.

Nevertheless, the kids on hand didn’t seem to mind the near-40 degree temperatures last Wednesday afternoon as they took part in the fourth annual Pitch, Hit & Run competition hosted by the Tennessee Smokies in collaboration with the Boys & Girls Clubs of the Tennessee Valley.

Around 60 boys and girls from 7 to 13 years old, representing nine different clubs, participated.

“It’s an initiative with Major League Baseball to get inner city kids involved in baseball,” said Carlye Clark of the Boys & Girls Clubs of the Tennessee Valley.

One of the best things about it for the youngsters is walking into Smokies Stadium, said Clark. For some of them, it’s their first-ever visit to a professional sports venue.

“The minute they walk in, they are in awe,” said Clark. “Their mouths are a gap and they’re looking around. They want to go in the dugout and they want to run in the outfield. It’s very exciting.”

With some warmer weather arriving earlier this year, Clark said quite a few kids went through a “tryout process” at the local clubs, with top competitors earning the chance to compete at Smokies Stadium.

“Last year it was snowing. This year it’s a tiny bit warmer, the sun is shining and we don’t have snow,” said Clark, laughing.

Pitch, Hit and Run is the official skills competition of Major League Baseball. The grassroots program is designed to provide Club members with an opportunity to compete, free of charge, in a competition that recognizes individual excellence in core baseball/softball skills.

The top individual finishers at the local level, along with the All-Around Champion in each age and gender group, can advance to the sectional level.

From there, top competitors qualify for the National Finals at the summer MLB All-Star Game.

Clark said Knoxville has never had a qualifier for the National Finals.

HOME OPENER: The Tennessee Smokies will play their first home game of the 2018 season against the Jackson Generals on Wednesday, April 11. The Smokies will start out on the road at Mississippi April 5.

The complete schedule for this season and information regarding tickets can be found online at smokiesbaseball.com or by calling the Smokies’ ticket office at 865-286-2300.