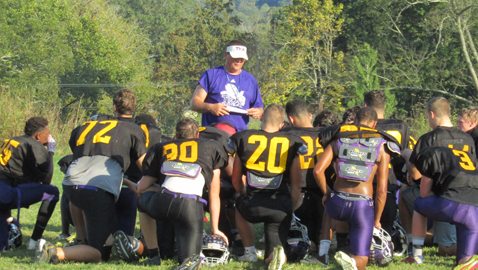 The King’s Academy football team had an eye-opening win in Week 2 this season when the Lions defeated Grace Christian Academy 21-6.

“They’re one of those programs we’re trying to be like,” said Matt Lowe, who is in his fifth season as head coach at TKA, a member of the TSSAA’s new Division II-A classification this year.

“Our kids were excited and there were a lot of people here that night. That was a big momentum swing for this football team. The kids have continued to kind of ride that wave.”

The King’s Academy, which had an open date in Week 6, is 4-1 this season and scheduled to host Concord Christian School this Friday. The Lions’ lone loss came at Greenback, one of the state’s top Class 1A teams, in Week 4.

“We have a great group of senior leaders,” said Coach Lowe, a former Powell High standout and head coach. “They were not only working hard themselves in January and February, they were bringing their teammates with them. They were making sure everybody was in the weight room and right there beside them.

“I’ve said it for many years, whenever some of your most talented players are your best leaders, you are going to have a great chance to have an extremely good team. That’s what I think is happening here.”

The King’s Academy has 26 players on its roster, and while that may seem like a small number to some, “That’s a big number for us,” said Lowe with a laugh. “When I got here there were 16.”

The front seven on defense and the offensive line are the strengths of the team.

“It’s a unique situation for us to have depth and talent up front and in the offensive line,” said Lowe. “In the past, we’ve been more gifted in the skill department. This year it has flipped around.”

The Lions’ front seven had a special challenge in their Week 5 game at Mt. Juliet Christian Academy when it went against Darius Hylick, who was nationally ranked with 900-plus yards in four games. The Lions held Hylick to 31 yards on 14 carries, said Lowe.

The most experienced in the the offensive line are Akporoghene at left tackle, Atchley at right tackle and Hamilton at right guard. Playing the left guard position are Michael Huffaker and sophomore Bailey Rollins (6-6, 300).

Senior Cody Wyllins rushed for 316 yards in the 35-21 win at Mt. Juliet to raise his season total to 858 yards. He has scored 11 touchdowns.

Lowe also has a lot of confidence in his four-year starter at quarterback, Brandon Burgess (6-5, 220).

Defensively, Lusby leads the Lions with 62 tackles. Hall has 38 stops and Anderson 34.

“Six or seven teams are in contention for the Division II-A state championship and hopefully we’ve put ourselves in position to be one of them,” added Lowe.

HEADLINERS: Several region matchups will be played this week, starting with Rhea County at Knoxville Catholic in the MyVLT Rivalry Thursday game.

Friday attractions will include Science Hill at Farragut, Dobyns-Bennett at Bearden, Central at Halls and Powell at Campbell County.

NOISEMAKERS: Powell improved to 5-1 with an impressive 42-22 victory over visiting Lenoir City in the Battle of Panthers and Grace Christian Academy knocked off Class 1A state power Greenback, 21-7.

Meanwhile, Fulton fell from the ranks of the unbeaten with a 41-12 loss at Maryville, and in another Week 6 attraction, Knoxville Catholic bowed to Brentwood Academy, the state’s top rated team, 50-14.

Pennington directed drives of 90 and 91 yards after the Spartans trailed 10-7 at halftime and threw the go-ahead pass to Robbie Pope on the last play of the third quarter.

(Pennington went on to play college ball at Marshall and several seasons in the NFL).