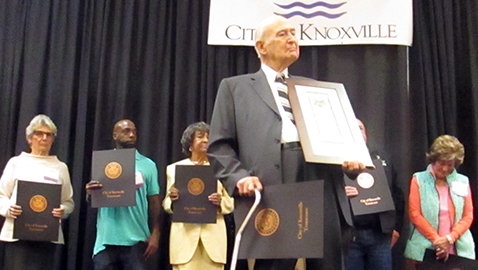 The Annual Neighborhood Conference Awards and Networking Luncheon had several surprises, not the least of which is that more than 600 people attended. The popular event was held at Hotel Knoxville, the former Knoxville Marriott, and featured three workshop break-out sessions and more than 60 booths manned by vendors and local organizations.

Mayor Madeline Rogero used the occasion to honor the late Lynn Redmon who died a few days prior. She spoke of his many neighborhood and political activities. Knox County Mayor Tim Burchett mentioned Redmon in his welcoming remarks as well.

“David’s tireless dedication has built the Office of Neighborhoods into an essential connection between neighborhood associations and City government. He has helped neighborhood groups organize and advocate effectively for their priorities,” Mayor Rogero said. “Debbie shares his commitment to working with communities across Knoxville, and she will make sure the Office remains an invaluable resource for our residents.”

Sharp opened the event and acted as host during the luncheon.

Kirk Anderson was chosen to receive the Diana Conn Good Neighbor of the Year honors and the award was accepted by James Newbill who had nominated Anderson. Rogero said that Anderson was a longtime resident of the Timbercrest neighborhood. He has been active in the association there, in the neighborhood watch, worked to beautify two entrances and has performed numerous acts of kindness for his neighbors.

Rogero said that Anderson and his brother, realizing that two neighbors were having difficulty exiting their car after a doctor’s visit, carried one of them from the car to their house, up the stairs and into their bed. Anderson stayed with the couple until they were able to be left on their own.

All the nominees were invited to the stage and included David Gillette, Helen Bachrach, Paula Minhinnett, Stuart Hall, Sylvia Cook and Yarrish Cook.

Neighborhood groups honored for their projects and efforts during the event were awarded a $75 check from the city and a certificate of honor. These areas included Edgewood Park, Forest Heights, Island Home Park, Mechanicsville, Morningside Heights, RiverHill Gateway, Southside Waterfront, We Care Neighborhood Watch and Westmorland Hills.

The break-out sessions included a presentation of the city’s proposed Recode regulations that are now being drafted, a conversation and address by Police Chief David Rausch about opioid abuse and gun control, and a discussion about neighborhood cooperation and revitalization.