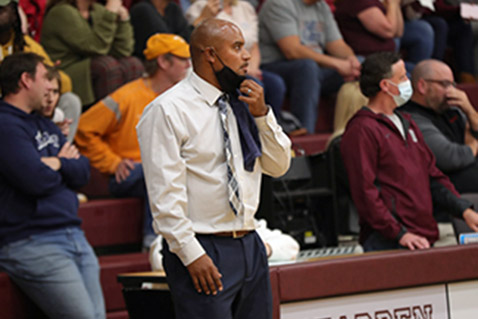 Farragut High’s Jon Higgins has been voted The Knoxville Focus / Coaches’ All-Knox County Coach of the Year in boys basketball for 2021-22.

When Higgins heard the news, he appreciated the award coming from his fellow peers. But perhaps what even topped that feeling was the gratitude he showed for his players.

“It’s a great honor,” said Higgins Friday. “But to be voted on by your fellow coaches to receive that honor, as any coach knows, you wouldn’t be here without the kids. Our kids have worked extremely hard to have success this year. I’m just glad I’m able to be a part of it.”

Higgins was a runaway winner for the award, which is based on regular season play. Four other coaches – Tyler Cate of Carter, Mike Hutchens of Knoxville Catholic, Ricky Norris of Webb School and Mike Wilkins of Concord Christian School – were recognized in the voting.

One coach who voted for Higgins said: “I believe they have exceeded expectations.”

Higgins and the Admirals notched some big victories this season and probably none was bigger than the 62-57 overtime win over archrival Bearden on Dec. 3 in the Dawg House. It was the school’s first win over the Bulldogs since 2016 and Higgins’ first since his arrival at Farragut in 2017.

The two teams split in the regular season and were District 4-4A co-champions.

Farragut went into the Region 2-4A tournament Saturday with a 23-7 record.

Higgins was hired at Farragut in April of 2017. Prior to that, the former University of Tennessee basketball standout was head coach at Central for five seasons. He was an assistant under veteran coach Jody Wright at Fulton for three seasons before taking his first head job at CHS.

As for his current team, Higgins said: “I’ve been fortunate to coach a lot of these kids since they were freshmen and to see their improvement and growth each year has been wonderful.

“Anytime you get a very experienced team like I have. as long as they continue to work hard, you’re going to have success, if you’re doing the right things … Right now we are experiencing that and they are doing a great job of teaching, holding the other kids accountable for things that they do. So hopefully, we can have sustained success over the next few years as well.”

Higgins currently has six seniors, including five who have played for at least three years.

Edwards edges Atwell for Player of the Year

Edwards edged Farragut point guard Dillon Atwell by one vote. Elijah Bredwood of Bearden, JJ Faulkner of Karns and Tyler Lee of Fulton tied for third in the voting.

Edwards, a UT signee, is currently a finalist for the TSSAA’s Mr. Basketball award in Division II-AA, an award he won last season as a junior.

As of February 14, BJ had scored 2,154 career points, collected 774 rebounds and dished out 545 assists with three regular season games and the postseason remaining.

Atwell, a 6-2 senior who was named the District 4-4A MVP this season, averages 17.3 points per game, 5 rebounds, 6 assists and 3 steals. He’s shooting 48 percent from the field and 38 percent from 3-point range.

Head coaches at each of the 20 Division I and Division II high schools in Knox County that play basketball were contacted by The Focus to nominate players from their team for All-Knox County consideration based on regular season play.