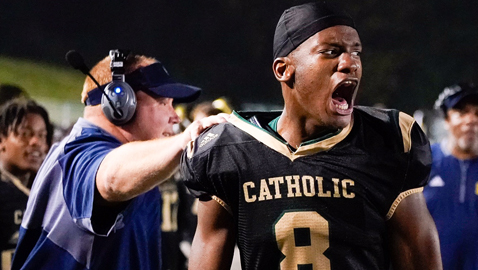 Knox County will have six teams in Class 5A second-round playoff action this Friday night.

Halls and South-Doyle will be meeting for the second time when they collide at Halls. The Cherokees notched a 44-6 victory in the regular season.

Both teams are running hot. South-Doyle beat Tennessee High 44-29 Friday for its fifth straight win, while Halls turned back David Crockett 49-21 for its fifth win in its last six outings. The Red Devils’ lone loss in the stretch was to South-Doyle.

Central and West posted road wins to advance to the second round. The Bobcats blanked Daniel Boone 16-0, while the Rebels held off Rhea County 15-13.

Senior cornerback Juan Davis’ interception in the end zone with less than a minute to play preserved West’s winning margin.

The Rebels will play at Oak Ridge in the second round, while Central goes to Sevier County. Both West and Central will be trying to avenge regular season losses.

The King’s Academy passed its first-round test in Division II-A with a 62-14 win over Clarksville Academy. The Lions will play at Nashville Christian in Friday’s second-round action. Both teams are 8-3.

EXCITING ENDING: Edson Guity Castro kicked a 46-yard field goal with eight seconds left on the clock to lift Karns to a 38-36 win over Clinton in its final game of the season Oct. 27.

“Edson is from Honduras, a soccer player that had never kicked a football until this August,” said Karns Coach Brad Taylor.

“It was a wild, back-and-forth game. I’m proud of how our guys competed and played all the way to the end. Great way to end an improved season.”

NUMBERS: Halls’ Region 2-5A title was its first region championship season 1996 … Hardin Valley’s exciting 37-36 victory over Farragut was the Hawks’ 50th win in the history of their program … Maryville posted its 93rd straight win over a Knox County team when it defeated Bearden 28-0 in Class 6A playoff action Friday. The streak started in the 2000 season … Zaevion Dobson’s No. 24 was retired on senior night at Fulton Oct. 27 and will never be worn again by a Falcon football player. Dobson was a fatal victim of gang shooting as he shielded two friends in an act of heroism in December of 2015.

PREPS OF THE PAST: Fifty years ago, on Nov. 3, 1967 – East High’s Eddie Johnson, halfback and defensive standout, led the Mountaineers to a 21-6 win at Holston. Johnson gave East an early lead when he caught a 38-yard touchdown pass from Mike Daniels, and then in the fourth quarter returned an interception 100 yards to halt a potential tying drive by the Warriors.

On that same night, Skipper Bean’s 58-yard TD run ignited unbeaten Fulton’s 28-0 win at Oliver Springs. Ed Taylor had two TD runs and Vince Ingle the other. Jackie Walker was a standout on defense and kicked all four extra points.

(The TSSAA football classification system and playoffs did not start until 1969).