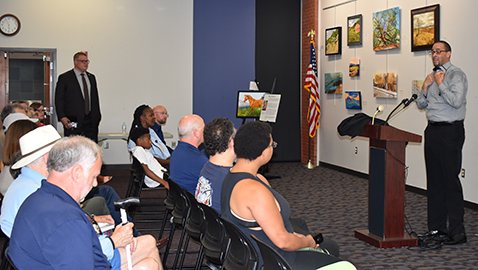 If there is one thing the East Knoxville Community Meeting does well, it’s keeping its members and community well informed of the priorities and initiatives of elected officials those candidates running for city offices. In a series of candidate-highlighted events, Knox County Mayor Glenn Jacobs was welcomed to the fourth meeting of its kind by moderator Michael Covington at the Burlington Public Library last Monday.

The mayor’s message was about the priority of creating and retaining jobs in Knoxville. He explained, “The reason I believe that is so important is because good jobs solve a lot of other problems.” He spoke for more than 30 minutes primarily about this topic but touched on the issues of education, literacy, substance abuse, and detention and jail populations also.

“Jobs is the key to creating an environment which is friendly to business, promotes entrepreneurship, and rewards success. The best way to do that — especially in attracting and retaining quality businesses — is through workforce developments … which is education and getting people ready to go into jobs and to go into life,” said Mayor Jacobs.

“We have the world’s foremost research laboratory at ORNL in our backyard, University of Tennessee here in Knoxville itself, and TVA ….  that combination is unmatched virtually around the world …. so we can compete with anyone from the Silicon Valley to the Research Triangle in North Carolina. We have the capability to more than compete in that market,” stated the mayor. He clarified the big driver for these areas is innovation and our area has the capability of doing just that, especially since the world is moving more toward an innovative economy and less toward a manufacturing economy.

An example the mayor gave of this innovation created in Knoxville is the world’s first-ever 4D printed car which sits in a showroom floor off of Hardin Valley Road because of the technology achieved from ORNL. Knoxville has companies making the theoretical become practical as with Manufacturing Demonstration Facility, and Mayor Jacobs fully expects the creation of a 4D printed house to follow suit in the future.

He outlined that one way to move our economy in this direction is looking at our curriculum for young people to be sure it includes a broad range of Career Technical Education (CTE) courses, particularly coding and robotics. As one of the innovative capitals of the world, equipping Knoxville students for the trades is key since for every four people who leave the trade industry, only one person is qualified to take their place.

The mayor explained our CTE classes are as good as the expertise of the CTE teachers who teach them which varies by school and class. Ideally, having a CTE high school of its own that would be centrally localized and on a bus line would expand the opportunities for students interested in learning the trades. He spoke of these classes including partnerships within the plumbing, construction, robotics, coding and programming fields so classmates can take part in apprenticeships as they are learning CTE skills. This will ensure young people are ready for work once they complete a program of courses. He also spoke of bringing back CTE courses to the middle school level, which Gov. Bill Lee supports as well.

The mayor personally viewed the Rule High School site and spoke with Knoxville College as potential locations for a future CTE facility. “The trades field is a game changer, especially for our at-risk kids,” added the mayor.

Competing in the marketplace includes increasing the literacy rates in Knox County which sit at forty percent for the third-grade benchmark test. The mayor encouraged the audience to read as a family, use the Beanstack Tracker app, and sign up for Read City USA, an initiative he started to get Knoxville reading.

A question and answer time followed that included talk of: indigent care budget cuts; “adulting” classes; the use of Vivitrol medication in a program to rehabilitate inmates in accord with sponsors; behavior health funding; and the Knox County growth policy.

The EKCM and the East Knoxville Business and Professional Association will host a City Council Candidate Forum on Saturday, July 20, 2019, from 11 a.m. to 12:30 p.m. at Vine Middle School. The event, inspired by 6th District City Councilwoman Gwen McKenzie, will be moderated by 1st District School Board Representative Evetty Satterfield. It will follow a 60-minute format in which each candidate will have sixty seconds per question to answer.

The next EKCM event will welcome Sheriff Thomas Baylor as its keynote speaker on Monday, August 5. For more information about this organization, email knoxvilletnneighborhoods@gmail.com, or visit the East Knoxville Community Meeting Facebook page.

To learn more about the mayor’s literacy initiative, visit Readusa.com.