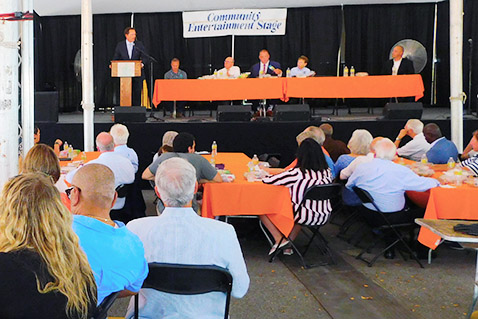 The 2022 Tennessee Valley Fair kicked off Friday with a luncheon at Chilhowee Park attended by about 200 local public officials and business leaders. The annual fair draws more than 135,000 visitors and leaves an $11 million impact.

Many of the speakers praised Shouse, one of the fair directors. Shouse told the large audience, “This is my favorite time of the year.” He paused and added, “Feels like football.” The fair kicked off with a large schedule of concerts and Mayor Kincannon said she was looking forward to seeing Joan Jett.

Kincannon also asked Shouse to come to the podium and told him, “You’re the MVP today.” She said that he ended his public career recently with “no enemies.”

Both Kincannon and Jacobs recognized elected and former officials in the crowd and it was announced that the fair features a new midway this year by Kissel Entertainment. Jacobs got a laugh when he noted that the first year of the fair, 1916, was the year the pop-up toaster was invented.

Burchett told a comic tale about Shouse catching a rat and referred to Shouse as his “grandfather figure.”

Cameron Sexton, speaker of the Tennessee House, was the main speaker and he talked about the state’s new “Truth in Sentencing” law. He praised the Knox County Sheriff’s Office and said the safety of the public should not be a partisan position.

He called for “everyone to come to the table” to uphold law and order so you feel safe in your community.

The Tennessee Valley Fair runs until Sunday, September 18th. Admission is $12 for adults and $9 for children. Concert tickets vary and you can check online at tnvalleyfair.org for entertainers, dates, times and admission. There’s lots more to do beyond the midway and concerts including competitions, shows, food, action sports, special events, and so much more!

“We’ve got it all” is this year’s theme at the fair.