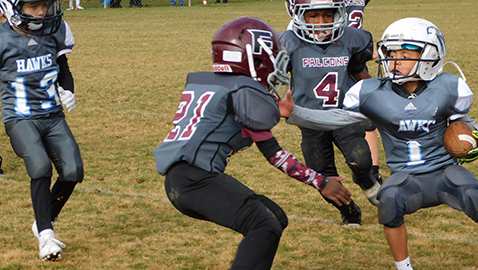 Sport’s future may be based on risk vs. reward

With more and more knowledge about concussions becoming available, some youth football programs across the country are changing to flag football for their participants ages 13 and under and not offering tackle football until age 14.

Here locally that hasn’t been the case in the Knox Metro Youth Football League, which has flag football for 6-and-under youngsters and tackle football for age groups 7U through 14U.

“We plan to continue our partnership with USA Football,” said Aaron Browning, Deputy Director of the City of Knoxville Parks and Recreation. “Each season, coaches complete online training related to youth football, from heat illnesses to concussions.

“The game has evolved since many of the coaches and parents played and more and more research is available, so connecting them with access to the latest research and recommendations by USA Football educates the coaches on how to provide a safe program for the children participating.”

Football may be the most popular sport in the United States, from the youth level to the NFL. But some parents are now weighing the risk and reward of the sport.

Browning was asked if he had heard any comments from parents of flag football age players or any other young age group about not allowing their children to continue to play “tackle” youth football.

“I have not personally discussed adding flag to additional age groups,” he replied. “We actually have parents with kids 6 and younger wanting to play tackle.”

Team participation was down some in the Knox Metro Youth Football League this season compared to the 2017 season, according to Browning’s figures.

Browning said he didn’t have information on the number of individual players that participated in the league this season.

In past years, the KMYFL has had athletic trainers on duty during league play.

“This year, we could not find a local company with athletic trainers, so paramedics with Knoxville Fire Department were at the fields,” said Browning.

“Their role was different than trainers. They were there to inform kids/coaches/parents that they felt the kid should go to the hospital for more treatment, similar to an accident, and would have assisted in serious emergency situations. Their training and protocols did not allow them to tape an ankle, for example.”

Browning also said he didn’t have any data regarding concussions occurring in league play.

Larry Cox, longtime commissioner for the Falcons youth football program, said “we try to keep our kids safe” and especially have no head-to-head contact. He said that’s the goal throughout all levels of football now.

What about reports from doctors stating at younger ages the brain is not fully developed and children could be susceptible to having problems later on in life?

“I think that’s something we definitely have to look at,” said Cox.

When asked if he had heard anything about parents not allowing their kids to continue in tackle football, he said, “They might ask my opinion.”

Cox pointed out youngsters could suffer head injuries in many sports.

“Let’s face it. Soccer is played without even a helmet on,” he said. “There’s risk there. There’s risk everywhere.

“They definitely can get hit by a pitch in baseball. They can catch an elbow in the head in basketball. They can have their head contacted in football sometime. But also, if they’re riding a bicycle, some of them have a headgear on and some haven’t.”

On the flip side, Cox said sometimes when a youngster is on the field with an adult instructing them, they may be safer than riding a bicycle down the street in the neighborhood.

“I love the game of football,” added Cox. “I played it when I was a kid. I played through high school and I enjoyed it. I still like to see kids play football. It might change. If it does, I got to change with it.

“I’m going to do my best on what I can for our kids and their safety.”

Even in flag football, where players are not wearing a helmet, a collision could occur.

In the end, many observers believe parents have to weigh the risk with the reward of the game of football, and then make their own personal decisions for what’s best for their children.