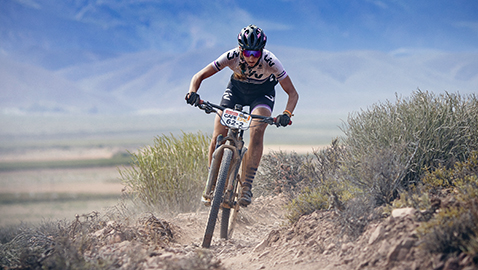 Cycling has taken Kaysee Armstrong to India, Chile, Canada and Africa and her climb as a mountain bike racer has been like a dream come true.

The No. 1 ranked female stage racer in the United States in 2018, who also is a local accountant and South Knoxville resident, will be honored as the Chad Pennington Professional Athlete of the Year at the Greater Knoxville Sports Hall of Fame ceremonies Thursday night at the Knoxville Convention Center.

A major victory in 2018 for Armstrong came in the Trans Andes Challenge through the mountains of Chile. The five-day stage race covered 186 miles including more than 5.6 miles of pedaling uphill.

Coming back from a broken hand injury and her first race in over two months, the Liv athlete finished first in the Pro Women Solo in every stage and accumulated nearly an hour lead by the final stage.

“This year my team made me venture out from the stage racing to do other styles of racing on the calendar,” pointed out Armstrong recently. “Next year we are going back to focusing on the Stage Racing calendar.”

Kaysee has always been a competitor, starting on the family farm in East Tennessee. She remembers being outside on summer evenings, chasing lightning bugs and fighting with her twin brother.

“I didn’t know boys thought they were supposed to win back then,” she says. “I was always looking for a challenge and was a tumbler and competitive cheerleader in school.”

The Morristown East High graduate discovered her love for cycling late in college.

“While I was getting my masters in accounting at King University,” she said, “I was able to race with the cycling team and win several national championships. I settled on cross country mountain biking after flirting with several other disciplines. It appeals to my rough and tumble side. It rewards hard work but is often unpredictable and always exciting.

“It’s a life dream to be able to race as a pro for Liv bikes and has allowed me to travel the world and become friends with like-minded people.”

Kaysee, 29, has encountered many interesting sights and sounds along the racing trail.

“This is what drives me to be a professional athlete in cycling,” she admits. “I get to travel around the world inspiring others and going to places that others will never get to go to. In mountain biking, you don’t just take a road that almost anyone can drive up, you get to go in the belly of the mountain, up trails that most wouldn’t hike up, see people that have never seen a bike race before or maybe even a bike.”

In India, Armstrong remembers encountering hundreds of people in the middle of nowhere – kids handing out high fives with shock on their faces from seeing a bike race in the middle of the day during a break from school and yelling ‘Hi!’

India also was a “special race” for Armstrong as she was the first woman to ever compete and complete the stage race.

“Men didn’t believe a woman was that strong, but by the end of the week minds were changed,” she said. “There were multiple times I battled the stares of confusion and disgust from men, but then there were a lot of times I would see women and girls sharing encouragement to me.

“One time before the race, when we were doing photos with fans, a mom asked if I would take a photo with her and her daughter. Then as we posed for the photo she said, ‘This is women power!’ Moments like that will always outweigh top steps in my opinion and still give me chill bumps to this day.”

In Chile, Kaysee experienced one of her most favorite days ever on a bike.

“We spent over 30 miles climbing to the top of a mountain, broke through the clouds, and then came out on one of the most spectacular views ever,” she recalled. “There were multiple volcanoes in view in the distance, and the landscape looked more like you were in Iceland than Chile with all the green covering the ground and waterfalls everywhere.

“Then we dropped into an Aspen tree line with a trail that felt fluffy beneath my tires from all the pine needle and gave me the sense that if fairies existed they would live here.”

Armstrong trains over 30 hours a week, counting cycling, time in the gym and stretching.

She also helps coach the Tennessee Bears, a NICA (National Interscholastic Cycling Association) team in Knoxville that has close to 100 youngsters from 9 to 18 years old.

One of her first pupils, Hunter Connell, just graduated from high school and received a cycling scholarship from Milligan College.

“I feel pretty proud of being a part of that!” she said.