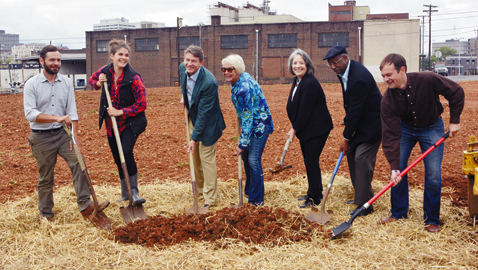 Randy Boyd always wanted to give city residents an opportunity to grow flowers or vegetables and enjoy the pleasures of gardening and he made it happen.

The City of Knoxville recently broke ground on the Old City Gardens, which are scheduled to open later this spring. Knoxville Mayor Madeline Rogero and City Councilmen Daniel Brown and Marshall Stair were also a part of the ceremony, which marks the official beginning of the project.

It will be located 300 Depot Ave., on the outskirts of the Historic Old City.

Boyd, who has been at the forefront of Knoxville’s revitalization campaign for sometime, said that the city’s urban garden was inspired by other similar projects in New England.

“The idea was inspired by the Fenways in Boston where local urban residents are able to rent small garden plots to grow flowers or vegetables,” Boyd said. “Often, you see people just sitting in their folding chairs and being in their garden.”

Knoxville’s urban residents may purchase one of 30 4 x 25-foot raised beds for an annual subscription fee of $100.

Abbey Fields will maintain the Old City site in exchange for a portion of the land, where it will grow food to be sold to area residents.

The site will be run by Brenna Wright and Abbey Farms manager Daniel Aisenbrey.

The Old City Gardens will be part urban farm and part community garden and it will include storage sheds for tools in an effort to encourage walking or biking to the facility.

It will also include a washing station, a shady pavilion and full access to water.

The new urban garden project will also offer a farm share program, which will follow the model of Community Supported Agriculture.

Wright said that she’s pleased to be involved in the project.

“There’s so much unused land in and around our cities,” Wright said. “Reclaiming these lots for garden space is a creative and economical way to enhance our neighborhoods.

“So much of our food production happens beyond our site. We hope this will give urbanites the opportunity to produce their own food while still enjoying all the amenities of downtown living.”