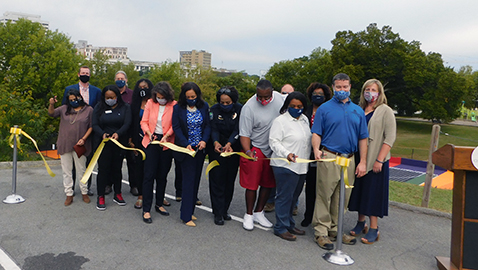 The Cal Johnson Recreation Center is like new. And the City of Knoxville celebrated all the work that went into renovating the building and the area around it in Downtown Knoxville Wednesday morning.

Mayor Indya Kincannon culminated the festivities with other city leaders as she cut the ribbon officially reopening of the facility and the surrounding area, which went through a complete transformation.

The community members, by virtue of their volunteer work, are also invested in the project.

Kincannon lauded the community and the City of Knoxville for the work they dedicated to these projects.

“These projects demonstrate how we can do bigger things that benefit our neighborhoods when we work together,” Kincannon said. “We can do more when we share our resources, commitment and talents.

The Cal Johnson Recreation Center has new family restrooms, new fitness equipment and the concession stands were upgraded. The rejuvenated facility also has meeting rooms and gives neighborhood residents access to computers and the internet.

“We now have computers with free internet, so that fills an educational divide,” Kincannon said. “People can come in and look for jobs or come in and do their homework.”

The adjacent basketball courts were upgraded and painted. That outdoor facility includes a mural with inspirational quotes from Johnson, who was born into slavery but later became Knoxville’s first African-American millionaire and legendary University of Tennessee women’s basketball coach Pat Summitt.

The upgrades to the Cal Johnson Recreation Center were celebrated exactly 98 years after Johnson, a philanthropist, donated the land to the city according to Kincannon.

“Cal Johnson was born into slavery but he became Knoxville’s first African-American millionaire,” Kincannon said. “He was a philanthropist and he never forgot his roots. He never forgot where he came from.”

In the area surrounding the Cal Johnson Recreation Center, there is new outdoor playground equipment and new outdoor fitness equipment.

The 2K Foundation and former Lady Vols basketball star Candace Parker are also involved in the renovation projects of the center, located at 507 Hall of Fame Drive.