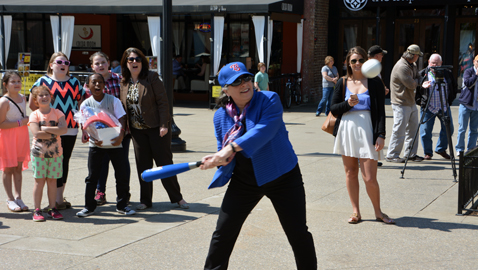 Rogero held a press conference at Market Square. After she addressed the media, she played a little pickup whiffle ball with the student council from South Knox Elementary School.

The Play Ball campaign strives to encourage youth to participate in baseball and softball but Rogero noted that Knoxville has plenty of adult leagues so that both adults and children may play.

“We want to promote play and we want everyone to live a healthy life,” Rogero said. “Baseball is a fun game.

As part of the Play Ball initiative, Rogero invited the city’s youth to participate in the in the City of Knoxville baseball and softball commission leagues. Leagues are open to players between the ages of 4-14.

The city also announced that former Major Leaguer Graig Nettles will make an appearance at the opening ceremony of Knoxville’s Inner City Youth Tournament on April 29.

He had 390 home runs and help lead the Yankees to a World Series Championship in 1977, when we won the Gold Glove as the American League’s top defensive third baseman. He also clubbed 37 home runs during that season.

The Play Ball initiative encourages youth to play organized baseball but it also strives to have players enjoy the game at a casual level with friends and families.