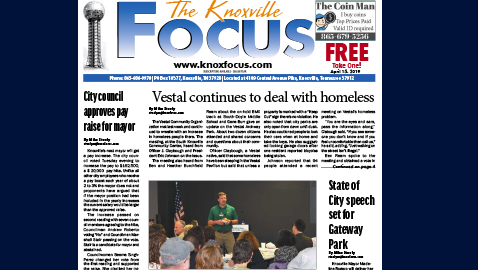 Vestal continues to deal with homeless

The Vestal Community Organization met last week and continued to wrestle with an increase in homeless people there. The meeting, at the South Knoxville Community Center, heard from Officer J. Claybough and President Eric Johnson on the issue.

The meeting also heard from Ben and Heather Burchfield Ream about the on-hold BMX track at South-Doyle Middle School and Gene Burr gave an update on the Vestal Archway Park. About two dozen citizens attended and shared concerns and questions about their community.

Officer Claybough, a Vestal native, said that some homeless have been sleeping in the Vestal Pavilion but said that unless a property is marked with a “Keep Out” sign there’s no violation. He also noted that city parks are only open from dawn until dusk. He also cautioned people to lock their cars when at home and take the keys. He also suggested locking garage doors after one resident reported bicycles being stolen.

“You are the eyes and ears, pass the information along,” Clabough said. “If you see someone you don’t know and if you feel uncomfortable then call us,” he said, adding, “Just walking on the street isn’t illegal.”

Ben Ream spoke to the meeting and obtained a vote in support of funding the BMX Track, saying it would be “a revenue engine” for South Knoxville. He said the facility would pay for itself in five years and the organization voted to add its name to a letter of support going to the county mayor and county commission.

Although work began on the track Knox County Mayor Glenn Jacobs pulled the funding because of cost overruns. Supporters of the BMX facility charge that the Public Building Authority only sought one bidder and the track and improvements at South-Doyle Middle School should be completed.

The area’s county commissioner, Carson Dailey, spoke briefly on the BMX situation and also responded to some citizen questions. He said that the track will be on the agenda for discussion in the commission work session in May and added, “I have 17 questions for PBA and the mayor’s office,”

The meeting also heard information on the South Knoxville Community Center’s “Young At Heart” senior citizen programs that includes gym walks, ceramics, trips, puzzles, fellowship and a quilting program. Membership in the program is only $5 per year.

Gene Burr reported the slabs at the base of the Vestal Arch were installed recently and a plaque recognizing donors to the park will be placed there. He said the project was completed thanks to a $2,000 grant from the Aslan Foundation.

Johnson reminded everyone about the upcoming election of officers and Carolyn Cline volunteered to be a community representative to the nominating committee. It was suggested that the organization look for a larger meeting facility for special events.