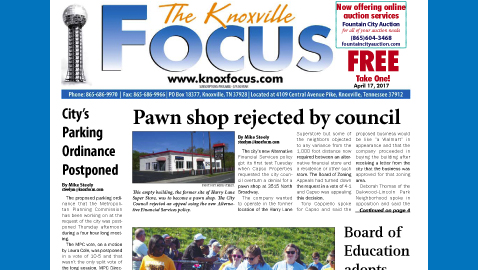 The city’s new Alternative Financial Services policy got its first test Tuesday when Capso Properties requested the city council overturn a denial for a pawn shop at 3515 North Broadway.

The company wanted to operate in the former location of the Harry Lane Superstore but some of the neighbors objected to any variance from the 1,000 foot distance now required between an alternative financial store and a residence or other such store. The Board of Zoning Appeals had turned down the request in a vote of 4-1 and Capso was appealing this decision.

Tony Cappiello spoke for Capso and said the proposed business would be like “a Walmart” in appearance and that the company proceeded in buying the building after receiving a letter from the city that the business was approved for that zoning area.

Deborah Thomas of the Oakwood-Lincoln Park Neighborhood spoke in opposition and said the new ordinance was in place when the building there was purchased.

“There are eleven financial services within a mile and it’s right at the entrance,” she said of the building’s location to her neighborhood.

Another citizen, Jim Brady, called such a business “predatory” and said the request “is not an issue of need.”

Cappiello countered by saying the proposed business “is not your pawn shop of old.” He told the council, “You can’t legislate things you don’t agree with.”

Councilman George Wallace made what he called a “solo opinion” and asked the council to rethink the issue. He cited the  letter from the city to the company approving the location.

“Five months later they learn the city has said that letter was invalid,” Wallace said.

“He was told he had the right zoning,” Wallace said, adding that the city had made a mistake.

Councilman Duane Grieve asked City Attorney Charles Swanson and Swanson replied that the letter approved a retail business for the location with no mention of a pawn shop.

“The letter could have been more complete,” Swanson said. He said the initial letter went out the same day that the new ordinance went into effect.

The council voted to deny the request. Wallace voted “No” and Councilman Marshall Stair abstained from the vote because of his firm’s association with John King, who represented Capso.

In other action the council voted to allot funds for a professional environmental study by S&ME, Inc. for the former Sanitary Laundry and Dry Cleaning on North Broadway and approved the same company and service for the former McClung Warehouse site on Jackson Avenue.

The council also approved an increase of $58,851 for work on the KAT Employee Parking Lot and upped the Fort Dickerson Gateway Park Project by $35,364 with Hickory Construction, Inc.

A $99,000 contract was approved with Roadway Solutions, LLC., for the city-wide guardrail program and a contract for $322,500 with Galls, Inc., goes to uniform items for the fire department, public service, Transit and Parks and Recreation Department.

The self-service beer ordinance, paving the way for approval of Pour Taproom on Jackson Avenue, was approved on first reading. Council member Brenda Palmer, who chairs the Beer Board, requested passing the ordinance.

The council also approved allowing Lakeshore Park to obtain a beer permit, exempting it from the no-beer in city parks ordinances. The permit would only be issued for special events to authorized vendors.

The city also voted to exempt Agricultural Zoned parts of the city, mainly Knoxville Botanical Gardens, to have chicken lots within 100 feet of a property or roadway.