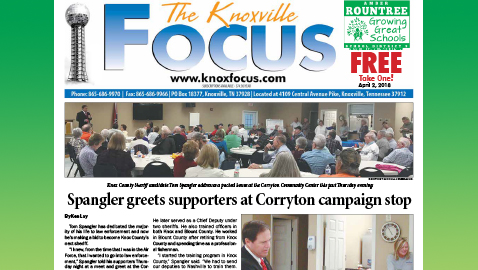 Tom Spangler has dedicated the majority of his life to law enforcement and now he’s making a bid to become Knox County’s next sheriff.

Spangler, who has 35 years of law enforcement experience, began his tenure at the Knox County Sheriff’s Department as a corrections officer upon returning to East Tennessee after he was honorably discharged from the Air Force.

“As soon as I came home from military service, I went to work for the Knox County Sheriff’s Office,” Spangler said.

During his time serving in Knox County, Spangler, a Carter High School graduate, has worked in all areas of the sheriff’s department. After a time in corrections, he became a patrolman, and administrator. He later served as a Chief Deputy under two sheriffs. He also trained officers in both Knox and Blount County. He worked in Blount County after retiring from Knox County and spending time as a professional fisherman.

“I started the training program in Knox County,” Spangler said. “We had to send our deputies to Nashville to train them. Then, I retired to become a professional fisherman because I love to fish.”

He returned to law enforcement training at the behest of Blount County Sheriff James Lee Berrong. He trained Blount County officers and while there, he trained a few to work in Knox County.

Spangler almost always had aspirations to be Knox County’s sheriff. He served as interim sheriff in 2007 after Black Wednesday.

“I thought about this, 10 years ago before I retired, but the timing just wasn’t right,” he said.

Spangler’s chief concerns are safety and combatting the opioid epidemic.

“I am passionate about your safety,” he said. “Safety in our streets, with our kids, within our schools, in your homes and in your subdivisions.