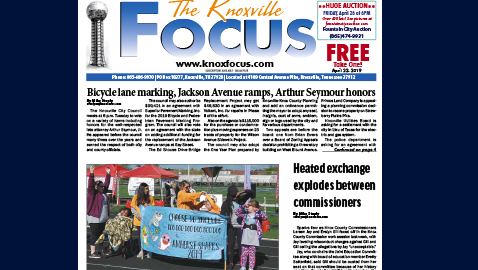 The Knoxville City Council meets at 6 p.m. Tuesday to vote on a variety of items including honors for the well-respected late attorney Arthur Seymour, Jr. He appeared before the council many times over the years and earned the respect of both city and county officials.

The Ed Shouse Drive Bridge Replacement Project may get $48,830 in an agreement with Volkert, Inc. for repairs in Phase II of the effort.

Also on the agenda is $115,000 for the purchase or condemnation plus moving expenses on 23 tracts of property for the Wilson Avenue Sidewalk Project.

The council may also adopt the One Year Plan prepared by Knoxville-Knox County Planning and add an ordinance permitting the mayor to adopt any seal, insignia, coat of arms, emblem, sign or logo used by the city and its various departments.

Two appeals are before the board: one from Brian Ewers over a Board of Zoning Appeals decision prohibiting a three-story building on West Blount Avenue.  Primos Land Company is appealing a planning commission decision to rezone property on Strawberry Plains Pike.

Knoxville Utilities Board is asking for a settlement with the city In Lieu of Taxes for the electric and gas system.

The police department is asking for an agreement with Metro Dug Coalition, Inc. to coordinate with Knoxville Mental Health Awareness Training to provide Mental Health First Aid training for responders, teacher and those who serve veterans. The department is also asking that the mayor be approved to seek funding for the three-year Internet Crimes Against Children Task Force. The $200,000 request would be used to hire two wounded military veterans to help work as Forensic Electronic Evidence Collection Specialists to help with a 4-month backlog of digital evidence.

The Public Service Department is asking that WestRock be hired to recycle materials collected through the household single stream recycling and the drop-off recycling containers. The Office of Community Relations is asking the council to approve transferring $20,000 from the Save Our Sons budget to the Change Center to fund three workforce development training and hiring events.