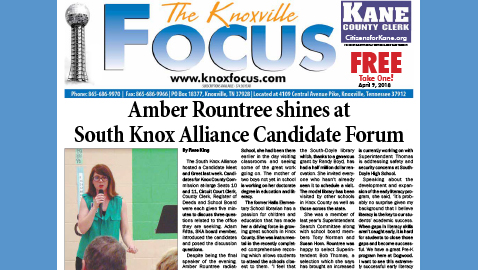 The South Knox Alliance hosted a Candidate Meet and Greet last week. Candidates for Knox County Commission at-large Seats 10 and 11, Circuit Court Clerk, County Clerk, Register of Deeds and School Board were each given five minutes to discuss three questions related to the office they are seeking. Adam Fritts, SKA board member, introduced the candidates and posed the discussion questions.

Despite being the final speaker of the evening, Amber Rountree radiated enthusiasm as she discussed her accomplishments and her vision for Knox County Schools.

Amber Rountree, who currently represents the 9th District and is serving a second term as vice chair of the Knox County Board of Education, returned to Dogwood Elementary for the candidate forum. As the school board member representing the Community School, she had been there earlier in the day visiting classrooms and seeing some of the great work going on. The mother of two boys not yet in school is working on her doctorate degree in education and literacy.

The former Halls Elementary School librarian has a passion for children and education that has made her a driving force in growing great schools in Knox County. She was instrumental in the recently completed comprehensive rezoning which allows students to attend the schools closest to them. “I feel that neighborhood support is so important to our kids,” she emphasized.

Rountree talked about the benefit of the community school program such as Dogwood. “This model brings services, partnerships and mentors to our school, which has contributed to our students’ success.”

Another recent success she mentioned has been the South-Doyle library which, thanks to a generous grant by Randy Boyd, has had a half million dollar renovation. She invited everyone who hasn’t already seen it to schedule a visit. The model library has been visited by other schools in Knox County as well as those across the state.

She was a member of last year’s Superintendent Search Committee along with school board members Tony Norman and Susan Horn. Rountree was happy to select Superintendent Bob Thomas, a selection which she says has brought an increased positive school culture and morale. She is also proud of the work accomplished by the educational disparity in educational outcome task force of which she was a member.

Rountree believes that there is still much to be done and said she has great plans for the future of Knox County Schools and the schools in South Knoxville. A top priority that she is currently working on with Superintendent Thomas is addressing safety and security concerns at South-Doyle High School.

Speaking about the development and expansion of the early literacy program, she said, “It’s probably no surprise given my background that I believe literacy is the key to our students’ academic success. When gaps in literacy skills aren’t caught early, it is hard for students to close those gaps and become successful. We have a great Pre-K program here at Dogwood. I want to see this extremely successful early literacy program continue to expand throughout Knox County. ”

Ronnie Rochelle, candidate for Seat 10, explained his vision and priorities for Knox County, “The number one thing we have got to change is that we are trying to grow the future of Knox County on a mountain of debt.” If elected he vowed to reduce the debt and stay on budget allowing more funding for schools and road improvements.

Larry Smith, candidate for the at–large Seat 11, promised to give top priority to upholding the county charter. He pointed out Knox County is financially sound with a triple A bond rating. He is committed to adequate pay for teachers, sheriff employees and county employees. He claimed his personal relationships with city council members, county commissioners, state representatives, senators and school board members will be a great asset in open communication and interacting with budget planning.

Seat 11 commission candidate Justin Biggs emphasized the many great companies who are looking at Knox County and the importance of recruiting those businesses. He would like to update the road system, give attention to those areas of Knox County that have been overlooked and work with the school board to fund programs in early elementary school to address opioid abuse and mental health. He would like to see tax credit programs stretch out across the county.

“Economic development needs to spread throughout the county,” said Tori Griffin, candidate for at-large Seat 10. “East Knox County needs some attention so it matches the rest of the county. It is important that we bring jobs that offer a livable wage. We need to think long term 10-15 years ahead.” He told the crowd that he sees tax credits as okay with helping small businesses grow and develop as long as the county sees a return on the investment. These credits need to go to businesses that bring jobs and build economy.

The six Circuit Court Clerk candidates were asked their plan for Knox County if elected and their thoughts on records being accessible to the public.

Bo Bennett said he plans to do what he already does on a daily basis as director of operations for a software company specializing in software systems and efficiency for fee offices. “I have been in these offices and have learned how to make them more efficient by cutting down customer wait lines and decrease employee workloads and save a lot of money.”

Scott Smith sees the election for Circuit Court Clerk as the hiring of a business manager who can take care of dozens of employees and the need for someone who will be comfortable managing and who understands HR issues. He would like to digitize the office for instant information when cases are delayed so that those involved will be notified.

Candidate Sheri Ridgeway is experienced in helping families and children in the Juvenile Court system and wants to bring that experience to Knox County. She believes that excellent communication and customer service are a priority for the office.

Tim Wheeler believes that his experience as deputy clerk and chief deputy clerk sets him apart from the other candidates. One of his top goals would be to work within the budget and turn over excess fees to the Knox County general fund as other fee based offices have.

Don Ridings believes his 36 years as a business owner overseeing budgets and staff as well as his background in IT make him the best candidate for Circuit Court Clerk. He would like to see technology changes that would give customers, judges, attorneys and the public the ability to file online while also retaining the ability to file in paper for those who do not use or have access to the internet.

Both candidates for County Clerk were asked to discuss their plan for the county, and technology and accessibility of public records.

Roger Kane was in Nashville on legislative business. John King spoke on his behalf: “If elected as Knox County Clerk, Roger’s plan would include a top to bottom review of the programs offered to see where technology and customer service practices need to be enhanced or improved and seek the staff for advice on how improvements should be made. As a business leader he knows the significance of great customer service. He would like to see the option for vehicle registration to be renewed every two years which would save customers time and possibly some money.”

Candidate Sherry Witt’s plans for Knox County include building a team of professionals with advanced knowledge of laws of Tennessee Code annotated and the Knox County Charter and finding the best balance and blend of innovative technology to advance the services offered by this office.

Candidate for Register of Deeds Nick McBride has served as the Chief Deputy to the Register for over ten years.  He explained the role and function of the office that maintains records such as property deeds and Military Discharge records. If elected, he promises to continue advances in modernization of the office, and to safeguard, protect and maintain dependable offsite backup of our vital documents.

Candidate Kristi Kristy faces incumbent Amber Rountree in the race for the 9th District seat on the board of education. She listed her experiences as a mother and volunteer in the schools where her children attended. She shared her concern for a declining graduation rate despite an increase in ACT scores, the need for career and technology programs in the schools and the need for more counselors and social workers in the schools.

The candidates gave plenty for voters to think about as they go to the polls. Early voting is April 11 through April 26. Election Day is May 1.