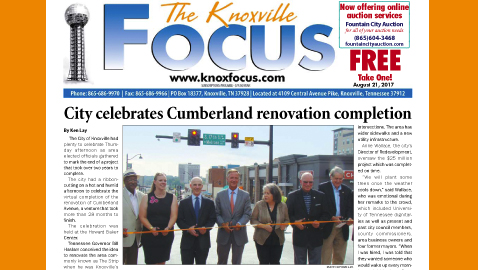 The City of Knoxville had plenty to celebrate Thursday afternoon as area elected officials gathered to mark the end of a project that took over two years to complete.

The city had a ribbon-cutting on a hot and humid afternoon to celebrate the virtual completion of the renovation of Cumberland Avenue, a venture that took more than 28 months to finish.

The celebration was held at the Howard Baker Center.

Tennessee Governor Bill Haslam conceived the idea to renovate the area commonly known as The Strip when he was Knoxville’s City Mayor. He was on hand for the celebration Thursday and he commended Mayor Madeline Rogero for continuing the work that he officially began in 2007.

“I would like to thank and commend Mayor Rogero for continuing what we began and for seeing this thing through,” Haslam said. “During my 14 years of public service as a mayor and governor, I’ve learned one thing.

Rogero went ahead with the project and the Cumberland Avenue Streetscape Project began in April of 2015 and its purpose was to make the street safer and more pedestrian friendly. It was also intended to establish a more efficient connection to the downtown area.

“I first came here to be a professor at [the University of Tennessee] 40 years ago, and that was my first experience with Cumberland Avenue,” said Bill Lyons, Deputy to the Mayor and Chief Policy Officer. “Cumberland’s not been working for a long time.

Cumberland Avenue has been narrowed to three lanes and now features left-turn lanes at the intersections. The area has wider sidewalks and a new utility infrastructure.

Anne Wallace, the city’s Director of Redevelopment, oversaw the $25 million project which was completed on time.

“We will plant some trees once the weather cools down,” said Wallace, who was emotional during her remarks to the crowd, which included University of Tennessee dignitaries as well as present and past city council members, county commissioners, area business owners and four former mayors. “When I was hired, I was told that they wanted someone who would wake up every morning and think about Cumberland Avenue.

“What I didn’t know was just how many times that I would wake up in the middle of the night and think about it. I want to thank my husband and my family for sticking with me through this. This is truly a great day.”

Rogero called the project “a total and complete team effort” and she noted that it couldn’t have happened without the area’s property and business owners.