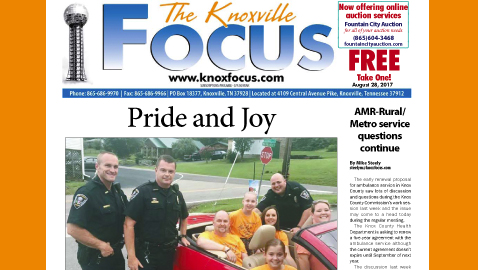 Faith, family and community converge to celebrate a miracle

Johnny Sawyer Dyer just wanted to go home. But even the imagination of a seven-year-old could not have envisioned what was waiting for him when he got there.  Last Tuesday night when Sawyer and his family returned to the Gibbs community after a three-month hospital stay, they were greeted by hundreds of supporters clad in orange – and even a couple of superheroes – to welcome him home, in full remission from leukemia.

Smiling faces lined both sides of Tazewell Pike all the way from Fairview Road to Harbison’s Crossroads – a distance of nearly half a mile. Sawyer, his sister Maddie, and parents Ron and Misty rode in a convertible, as grandparents and other family and friends followed in a pickup truck driven by Tony Crawford, worship pastor at Fairview Baptist Church where the Dyers are members. It was Crawford’s wife Becky who came up with the idea and plan for the homecoming celebration.

“The inspiration for the parade came from Sawyer himself,” she said. “His faith and that of his family has not only touched the hearts of our church family at Fairview, but also of Gibbs Elementary School, other churches in the community, and has even reached as far as social media has taken it.”

Crawford said Sawyer’s story has gone well beyond the borders of the Gibbs community, and is even touching people throughout the U.S. But in the end, she said, it was home that meant the most to Sawyer and his family.

“The reason we chose to invite the Gibbs community to Tazewell Pike to welcome him home is because they’ve been a part of his journey from the beginning. Whether they’ve bought t-shirts, gave blood, shaved their head, or prayed, they’ve supported a family many of them didn’t even know. That’s what community is all about.”

The outpouring of support even exceeded Crawford’s expectations.

“To see Tazewell Pike lined in a sea of orange was awesome. But to see the support of Rural Metro, law enforcement, and the local news channels was beyond incredible. I am so blessed to live in the Gibbs community. And to me the greatest part of this journey is that it’s not about Sawyer, but his faith in our God who heals.”

After Sawyer was diagnosed with acute myeloid leukemia, an aggressive disease that required immediate and extensive treatment, his family turned first to the only place they knew they could find healing – their faith in God. Their church family at Fairview, as well as many others across the community, joined them in round the clock prayers being offered for Sawyer’s healing. There were many times when their faith was tested to the limits, a reality experienced firsthand by Sawyer’s grandfather Keith Weaver, who is also one of the pastors at Fairview.

“The thing that stuck out to me was how the Lord would always reassure us even in the most discouraging moments,” he said. “It was amazing how he would send people into Ron and Misty’s path who were survivors of AML. It happened over and over.”

Weaver said it was Sawyer’s positive attitude and unwavering faith that also helped sustain them through the most trying times.

“He believes,” said Weaver. “When they would explain to him the difficulties involved with some treatment or procedure he was about to undergo, he would just say, ‘ok, let’s go do it.’ Sawyer and his mom had a devotional they would read together. Sometimes when he could tell Misty was having a hard time, he would say, ‘It’s ok mom. We’ve got Jesus.’”

While Weaver is certainly proud of his grandson’s courage, pride is perhaps not the best adjective to describe the Dyer family – or the Weavers from Misty’s side. Both families are better defined by a spirit love, humility and devotion to Christ.  But it does speak to the strong sense of community felt by those who attended Tuesday’s parade. On the surface, Gibbs is a humble, unassuming place. But underneath runs a unique current of loyalty shared by the residents of the quiet corner of north Knox County. It is a sentiment that has deep roots in the farms, families, schools and churches that make up the Gibbs community. A slogan has been adopted by some that probably captures it as well as any. They call it ‘pride in the G.’

It’s a pride that takes many forms. Oftentimes it manifests in the Columbia blue and white of a Gibbs football game. It is displayed on signs commemorating baseball and softball state championships. It can even be seen through the tree line in the construction site of a brand new middle school. On this occasion it showed up clothed in the orange of unbridled joy, and in scenes too precious to ever forget.

Sawyer’s beaming face as he sat between his parents in the backseat of a convertible was worth a million words. On the tailgate of Tony Crawford’s pickup sat Sawyer’s grandmother, Nini Weaver, overcome with tears of joy. I think she must have shed one for every person there. In the cab were Sawyer’s paternal grandparents, Cindy and Ron Dyer, Sr. As the truck passed the spot where I stood, the parade slowed just enough for me to step into Tazewell Pike and enjoy a handshake with an old friend. His smile said it all.