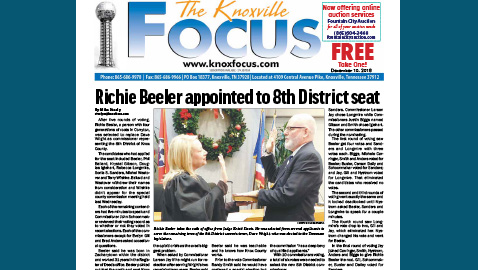 After five rounds of voting, Richie Beeler, a person with four generations of roots in Corryton, was selected to replace Dave Wright as commissioner representing the 8th District of Knox County.

Each of the remaining contenders had five minutes to speak and Commissioner John Schoonmaker reviewed their voting record as to whether or not they voted in recent elections. Each of the commissioners except for Evelyn Gill and Brad Anders asked occasional questions.

Beeler said he was born in Zacharytown within the district and worked 31 years in the Register of Deeds office. Beeler pointed out that the north and east Knox County district has lots of land for future development, praised the three new schools there and cited the opioid crisis as the area’s biggest problem.

When asked by Commissioner Larsen Jay if he might run for re-election after serving Wright’s two remaining term years, Beeler said he has “no idea, no plans.”

When asked why he would be the best person for the position, Beeler said he was teachable and he knows how Knox County works.

Prior to the vote Commissioner Randy Smith said he would have preferred a special election but said the cost of holding one was prohibitive.

Chairman Hugh Nystrom said the commission “has a deep bevy of qualified applicants.”

With 10 commissioners voting, a total of six votes were needed to select the new 8th District commissioner.

The first round of voting saw Beeler get four votes and Sanders and Longmire with three votes each. Biggs, Michele Carringer, Smith and Anders voted for Beeler; Busler, Carson Daily and Schoonmaker voted for Sanders; and Jay, Gill and Nystrom voted for Longmire. That eliminated the candidates who received no votes.

The second and third rounds of voting went exactly the same and it looked deadlocked until Nystrom asked Beeler, Sanders and Longmire to speak for a couple minutes.

The fourth round saw Longmire’s vote drop to two, Gill and Jay, which eliminated her. Nystrom changed his vote and went for Beeler.

In the final round of voting Jay joined Carringer, Smith, Nystrom, Anders and Biggs to give Richie Beeler the nod. Gill, Schoonmaker, Busler and Dailey voted for Sanders.

Beeler was sworn in immediately after the decision and will serve until August 21, 2020.