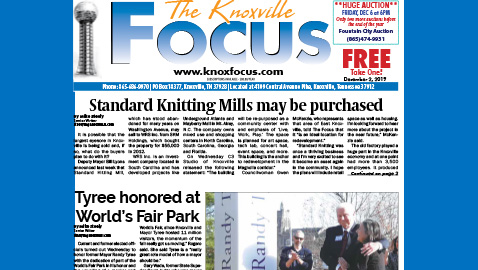 Current and former elected officials turned out Wednesday to honor former Mayor Randy Tyree with the dedication of part of the World’s Fair Park in his honor and the unveiling of a marker and plaque.

Mayor Madeline Rogero recognized the officials and said that when the renovation of the Performance Lawn was completed it was obvious to her that it should be named for Tyree. The $2.5 million renovated lawn will host events and festivals.

“In the 37 years since the World’s Fair, since Knoxville and Mayor Tyree hosted 11 million visitors, the momentum of the fair really got us moving,” Rogero said. She said Tyree is a “really great role model of how a mayor should be.”

Gary Wade, former State Superior Court Judge who was mayor of Sevierville while Tyree was Knoxville mayor, couldn’t make the dedication but spoke to the audience via cell phone. He teased his old friend and noted that Tyree’s time as mayor had an impact on Sevier County, boosting tourism there, and how Tyree was a role model for him.

“Because of the World’s Fair, dramatic economic impact took place,” he said, adding that Tyree is a “wonderful ambassador” for the city of Knoxville.

Sixth District Councilwoman Gwen McKenzie, the first African-American woman elected to Knoxville City Council, thanked Tyree for his leadership and his friendship with her family.

“Randy Tyree has been like family,” she said. She explained that her father moved to Knoxville to open the Urban League during turbulent racial times and her father and Tyree became “like brothers.”

“Together they both worked to bring racial healing to Knoxville,” she said, adding that when her father passed away in a traffic accident people like Tyree embraced her family.

“They took us under their wings and let us know that Knoxville was still home to us,” McKenzie said. She said that Tyree has known her since she was a little girl and hopes he is proud of her accomplishments.

Mayor Rogero invited the Tyree family to help unveil the tall marker and plaque and, following that, Tyree spoke.

He was obviously honored by the event and spoke to the well-wishers. He read a humorous note from former city council members and said the naming of the Performance Lawn in his honor was “extremely gratifying.”

Speaking despite his laryngitis, Tyree thanked the many people who helped him prepare and present the 1982 World’s Fair. Ever the politician, he noted that 2020 is an election year and that the city now has seven women on the upcoming city council and the second woman that will serve as mayor.

“I found something why women are so successful in politics,” he said, quoting the first woman mayor in Canada. “Whatever women do they must do twice as well as men to be thought half as good. Luckily this is not difficult.”

“The World’s Fair was a gift that kept on giving and will continue to give. Thank you for this honor and thank you for attending,” he said.