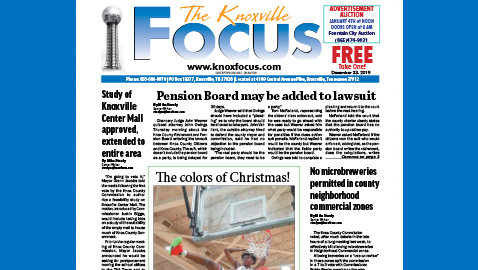 Pension Board may be added to lawsuit

Chancery Judge John Weaver quizzed attorney John Owings Thursday morning about the Knox County Retirement and Pension Board entering the lawsuit between Knox County Citizens and Knox County. The suit, which doesn’t include the pension board as a party, is being delayed for 30 days.

Judge Weaver said that Owings should have included a “pleading” as to why the board should be allowed to take part.  John Valliant, the outside attorney hired to defend the county mayor and commission, said he had no objection to the pension board being included.

“The real party should be the pension board, they need to be a party,”

Owings was told to complete a pleading and return it to the court before the next hearing.

McFarland told the court that the county charter clearly states that the pension board has no authority to up retiree pay.

Weaver asked McFarland if the citizens won the suit who would enforce it, adding that, as the pension board writes the retirement, does the calculations, writes checks, and administers the pensions, the board must be part of the case.

“I can’t do a suit if I don’t have two sides,” the judge said, adding, “If you leave the pension board out I don’t know how to enforce it” referring to a possible victory for the citizens.

“What do you intend to do in this case Mr. Owings?” Weaver asked. “I don’t have a clue and I don’t have the plea.”

Weaver then said he could not enforce an order without the pension board being involved. He gave Owings 30 days to respond to the paperwork request.