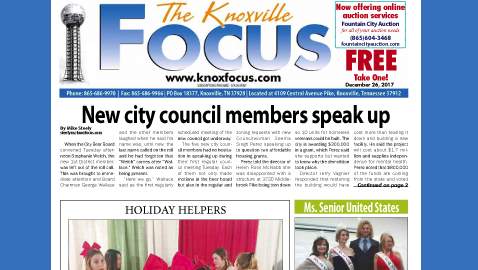 When the City Beer Board convened Tuesday afternoon Stephanie Welch, the new 1st District member, was left out of the roll call.  This was brought to immediate attention and Board Chairman George Wallace and the other members laughed when he said his name was, until now, the last name called on the roll and he had forgotten that “Welch” comes after “Wallace.” Welch was noted as being present.

“Here we go,” Wallace said as the first regularly scheduled meeting of the new council got underway.

The five new city council members had no hesitation in speaking up during their first regular council meeting Tuesday. Each of them not only made motions in the beer board but also in the regular and zoning requests with new Councilwoman Seema Singh Perez speaking up to question two affordable housing grants.

Perez told the director of Helen Ross McNabb she was disappointed with a structure at 3720 Middlebrook Pike being torn down so 10 units for homeless veterans could be built. The city is awarding $300,000 in a grant, which Perez said she supports but wanted to know why the demolition took place.

Director Jerry Vagnier responded that restoring the building would have cost more than tearing it down and building a new facility. He said the project will cost about $1.7 million and supplies independence for mental health. Perez noted that $800,000 of the funds are coming from the state and voted for the grant.

She also voted for an affordable housing grant for The Restoration House of East Tennessee for the development of 12 units for low-income single mothers at 2205 Village place Way.

The Beer Board, led by Councilman Wallace, was a bit of a learning experience for the new members with Wallace often adding “pending final approval” to several of the uncontested beer license requests. The new members caught on quickly and even began asking applicants if their employees had completed the “server compliance” training.

Generally the council member of the district where the business is applying, or on request in the regular meeting that is for their districts, are turned to for the motion.

New Councilman Andrew Roberto joined the discussion of a request from SWB Holdings for a beer kiosk in a local mall asking about safety exits from the food court there to the outside.

Welch moved to approve a small convenience store. She and Roberto asked two applicants about server training and after Councilman Finbarr Saunders said he was uncomfortable with the application, Roberto moved to postpone the decision for thirty days.