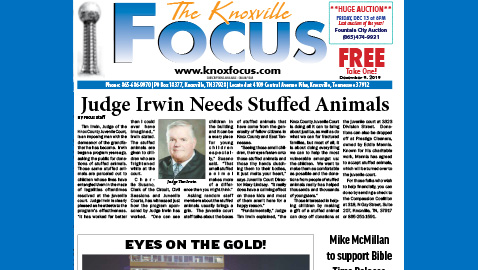 Tim Irwin, Judge of the Knox County Juvenile Court, is an imposing man with the demeanor of the grandfather he has become.  Irwin began a program years ago, asking the public for donations of stuffed animals.  Those same stuffed animals are parceled out to children whose lives have entangled them in the maze of legalities oftentimes resolved at the juvenile court.  Judge Irwin is clearly pleased as he attests to the program’s effectiveness.  “It has worked far better than I could ever have imagined,” Irwin stated.  The stuffed animals are given to children who are frightened while at the court.

Charlie Susano, Clerk of the Circuit, Civil Sessions and Juvenile Courts, has witnessed just how the program sponsored by Judge Irwin has worked.  “One can see children in the building and it can be a scary place for young children especially,” Susano said.  “That small stuffed animal makes more of a difference than you might think.”

Asking random staff members about the stuffed animals usually brings a grin.  The juvenile court staff talks about the boxes of stuffed animals that have come from the generosity of fellow citizens in Knox County and East Tennessee.

“Seeing those small children, their eyes fasten onto those stuffed animals and those tiny hands clutching them to their bodies, it just melts your heart,” says Juvenile Court Director Mary Lindsey.  “It really does have a calming effect on those kids and most of them aren’t here for a happy reason.”

“Fundamentally,” Judge Tim Irwin explained, “the Knox County Juvenile Court is doing all it can to bring about justice, as well as do what we can for fractured families, but most of all, it is about doing everything we can to help the most vulnerable amongst us: the children.  We want to make them as comfortable as possible and the donations from people of stuffed animals really has helped thousands and thousands of youngsters.”

Those interested in helping children by making a gift of a stuffed animal can drop off donations at the juvenile court at 3323 Division Street.  Donations can also be dropped off at Prestige Cleaners, owned by Eddie Mannis.  Known for his charitable work, Mannis has agreed to accept stuffed animals, which will be turned over to the juvenile court.