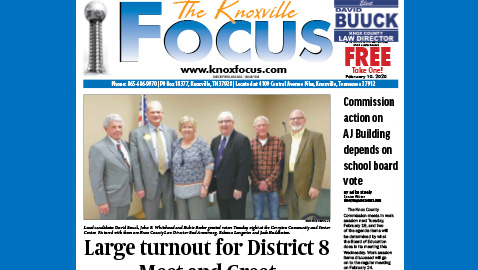 One person seeking re-election was absent as Knox County Board of Education member Mike McMillan, who is hospitalized, continues to battle pneumonia. Knoxville Focus Publisher Steve Hunley spoke on behalf of his friend.

Beeler, who is running unopposed for the Eighth District seat on county commission, served as emcee at the dinner, where hot dogs, cole slaw and potato chips were served to community members.

“But that’s the way the Good Lord would have it. We’re facing an important election. You hear that all the time. The next election is always important. But this election is extremely important. It’s important for our nation, our county and our community.”

Buuck was the one candidate at Tuesday night’s meeting who is not an incumbent. He’s looking to succeed the term-limited Bud Armstrong as law director. He’s no stranger to the law director’s office as he’s acted as Armstrong’s Deputy Director.

He noted that he was looking forward to carrying on the work that Armstrong has begun as the Knox County Law Director.

“I have been practicing law and down in the trenches, day in and day out for 40 years,” Buuck said. “I started when Jimmy Duncan was still a lawyer and he invited me to come to work for his firm. I’ve worked in conjunction with Bud.

“Bud always said that we don’t work for the government. We work for the taxpayers. We work for you, the taxpayer, because you are the government. We have 10 of the best attorneys working in our office. My opponent has not practiced law for 20 years. You have to have the respect for your law director. They (the attorneys) have to know that you’ve been there so they have respect. My opponent doesn’t have that.”

Whitehead has been with the county assessor’s office for nearly five decades, joining after completing military service in 1972.

His remarks were brief as he had another engagement in Karns.

“I’ve been with the county assessor’s office since 1972,” Whitehead said. “It’s the only job I’ve ever had, so I don’t have much of a resume. But I would love to have your vote.”

Hunley gave a laundry list of McMillan’s accomplishments during his time on the Knox County Board of Education.

McMillan has worked tirelessly for the students, teachers and others associated with Knox County Schools. He fought to keep rural schools open. He also fought to keep the school system’s custodians, when previous superintendent, Dr. James McIntyre, wanted those jobs outsourced. McMillan also fought for pay raises for the county’s teacher.

“You can be proud of the eighth district,” Hunley said. “I feel like I’m among family tonight and Mike was diagnosed in January with Type-A flu and it developed into pneumonia.

“I went to see him in the hospital last night and he’s doing well and he’s expected to make a full recovery. He’s done more for the schools than anyone in the eighth district. And that includes me. I served on the school board for four years. He helped appoint our new superintendent, Bob Thomas, who has been a breath of fresh air and he fought for pay raises for the teachers. He’s fought to keep rural schools open.”

McMillan was also on the board when Carter High School was renovated and when Gibbs Middle was opened. He’s also seen other schools open during his tenure and he’s accomplished several things while fighting two battles with cancer.