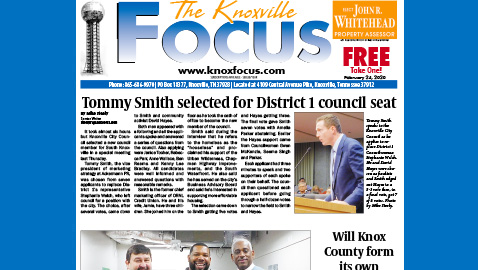 Tommy Smith, the vice president of marketing strategy at Ackermann PR, was chosen from seven applicants to replace District 1’s representative Stephanie Welch, who left council for a position with the city. The choice, after several votes, came down to Smith and community activist David Hayes.

Both men appeared with a following and all the applicants spoke and answered a series of questions from the council. Also applying were Janice Tocher, Rebecca Parr, Anne Wallace, Ben Reams and Kenny Lee Bradley. All candidates were well informed and answered questions with reasonable remarks.

Smith is the former chief marketing officer of ORNL Credit Union. He and his wife, Jamie, have three children. She joined him on the floor as he took the oath of office to become the new member of the council.

Smith said during the interview that he refers to the homeless as the “houseless” and proclaimed his support of the Urban Wilderness, Chapman Highway improvements, and the South Waterfront. He also said he has served on the city’s Business Advisory Board and said he’s interested in supporting more affordable housing.

Each applicant had three minutes to speak and two supporters of each spoke on their behalf. The council then questioned each applicant before going through a half-dozen votes to narrow the field to Smith and Hayes.