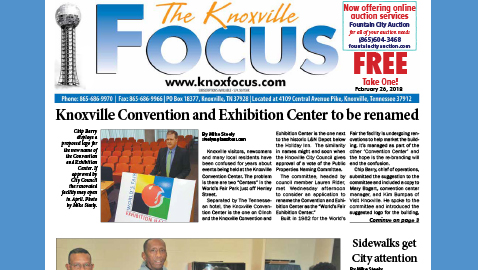 Knoxville Convention and Exhibition Center to be renamed

Knoxville visitors, newcomers and many local residents have been confused for years about events being held at the Knoxville Convention Center. The problem is there are two “Centers” in the World’s Fair Park just off Henley Street.

The committee, headed by council member Lauren Rider, met Wednesday afternoon to consider an application to rename the Convention and Exhibition Center as the “World’s Fair Exhibition Center.”

Built in 1982 for the World’s Fair the facility is undergoing renovations to help market the building. It’s managed as part of the other “Convention Center” and the hope is the re-branding will end the confusion.

The building is more than 66,000 square feet and the $2.1 million renovation includes a new heating and air system, roof repairs and new bathrooms.  The rebranding will go before city council for approval of the naming committee’s action.

“We’ll be branding and marketing the Exhibition Hall in a different way,” he said. The renovated building hopes to open in April and already there are sporting events booked there. Barry said he plans to move two exhibit cases there and may invite the public to submit World’s Fair items for display.

He said the floor space can hold 10 basketball courts and other courts for indoor sports practice and competition.

The new logo includes the flame from the original fair logo and committee member Molly Gilbert spoke up and said that her father-in-law, David Gilbert, designed the original flame for the fair.

Barry said that the Design Center and Visit Knoxville got together to design the full logo which also includes a representation of the Rubik’s Cube from the original fair, now on display above the center in the Holiday Inn.

He said there will be new directional signs at Clinch and Henley Streets and in the World’s Fair Park.