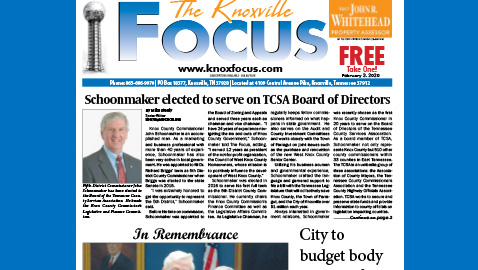 Schoonmaker elected to serve on TCSA Board of Directors

Knox County Commissioner John Schoonmaker is an accomplished man. As a marketing and business professional with more than 40 years of experience, Schoonmaker has also been very active in local government. He was appointed to fill Dr. Richard Briggs’ term as 5th District County Commissioner when Briggs was elected to the state Senate in 2015.

“I was extremely honored to get the opportunity to represent the 5th District,” Schoonmaker said.

Before his time on commission, Schoonmaker was appointed to the Board of Zoning and Appeals and served three years each as chairman and vice chairman.  “I have 24 years of experience navigating the ins and outs of Knox County Government,” Schoonmaker told The Focus, adding, “I served 12 years as president of the not-for-profit organization, the Council of West Knox County Homeowners, whose mission is to positively influence the development of West Knox County.”

Schoonmaker was elected in 2016 to serve his first full term as the 5th District County Commissioner. He currently chairs the Knox County Commission’s Finance Committee as well as the Legislative Affairs Committee.  As Legislative Chairman, he regularly keeps fellow commissioners informed on what happens in state government.  He also serves on the Audit and County Investment Committees and works closely with the Town of Farragut on joint issues such as the purchase and renovation of the new West Knox County Senior Center.

Utilizing his business acumen and governmental experience, Schoonmaker crafted the language and garnered support to file a bill with the Tennessee Legislature that will collectively save Knox County, the Town of Farragut, and the City of Knoxville over $1 million each year.

Schoonmaker is a member of the Farragut West Knox Chamber of Commerce, the Concord-Farragut Republican Club, and the West Knox Republican Club.  He also serves on the board of directors of Tennova Metro.

John and his wife, Heather, have been residents of the 5th District for 35 years.  Their two children, Laura and Justin, attended A.L. Lotts, West Valley, and Farragut schools. John and Heather share their home with their beloved beagle, Copper, who just turned five.

Schoonmaker is known for his detailed research into proposals before the county commission and his determination to find the best solutions for the citizens of Knox County.

Commissioner Schoonmaker is a Republican candidate up for re-election and early voting begins February 12th with the Primary Election coming March 3rd.