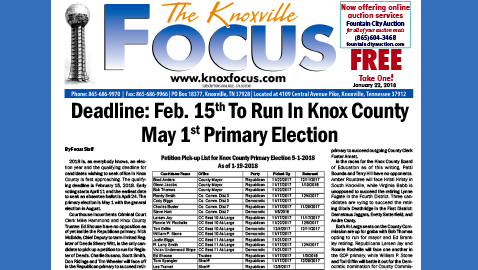 2018 is, as everybody knows, an election year and the qualifying deadline for candidates wishing to seek office in Knox County is fast approaching. The qualifying deadline is February 15, 2018. Early voting starts April 11 and the earliest date to seek an absentee ballot is April 24. The primary election is May 1 with the general election in August.

Courthouse incumbents Criminal Court Clerk Mike Hammond and Knox County Trustee Ed Shouse have no opposition as of yet inside the Republican primary. Nick McBride, Chief Deputy to term-limited Register of Deeds Sherry Witt, is the only candidate to pick up a petition to run for Register of Deeds. Charlie Susano, Scott Smith, Don Ridings and Tim Wheeler will face off in the Republican primary to succeed retiring Circuit Court Clerk Cathy Shanks. Sheri Ridgeway is the only Democrat to pick up a petition so far to run for Circuit Court Clerk.

Perhaps the two most anticipated races are those for Knox County Mayor and Sheriff. The mayor’s race pits Glen Jacobs against County Commissioners Bob Thomas and Brad Anders. The most heated race may be that for Knox County Sheriff where Chief Deputy Lee Tramel is challenged by longtime law enforcement veteran Tom Spangler. No Democrats have picked up petitions to run for either mayor or sheriff.

In the races for the Knox County Board of Education as of this writing, Patti Bounds and Terry Hill have no opponents. Amber Rountree will face Kristi Kristy in South Knoxville, while Virginia Babb is unopposed to succeed the retiring Lynne Fugate in the Fourth District. Three candidates are vying to succeed the retiring Gloria Deathridge in the First District: Dametraus Jaggers, Evetty Satterfield, and Andre Canty.

Republican Randy Smith, Chairman of the Knox County Commission, has no opposition so far and if things remain the same, will face Democrat Cody Biggs in the August general election. Current Commission Vice Chair Charles Busler is likewise unopposed inside the Republican primary, but may face opposition in the general election from Democrat Steve Hart.