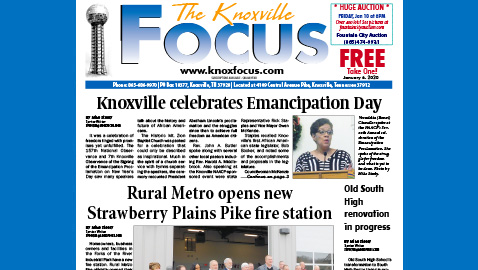 Fire Chief Jerry Harnish spoke briefly and, along with several elected county officials, cut the ribbon on the new facility. Harnish said it is the first new station in three years and thanked several people, including the community, for their support.

The fire station was formerly located in Industrial Park and the new location, according to Harnish, improves response time and reduces insurance premiums. The new fire station houses a pumper and a squad truck that carries specialized equipment for hazardous material incidents and other emergencies.

“Giving them a better location and equipment enables them to do an even better job of protecting our citizens and their property,” said Knox County Mayor Glenn Jacobs.

Rural Metro is self-sustaining with subscription-based service. No tax dollars are involved in the operation or the new station. Property owners who are not subscribers may still receive service but at a higher rate than subscribers.

Rural Metro Fire is the largest private fire department in the nation and provides fire response and medical response with paramedics on fourteen fire engines in the county. The company has operated in Knox County since 1977 and is designated as the “duly constituted” public fire department serving the community.

“The partnership with Rural Metro has been phenomenal,” Mayor Jacobs told those attending the ribbon cutting.