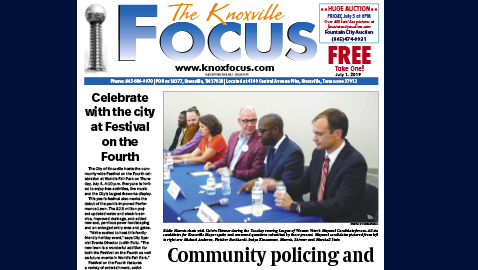 Community policing and the candidates for mayor

One of the topics addressed during the League of Women Voters Mayoral Candidate Forum Tuesday night was community policing. Knoxville is currently planning to relocate the police and fire departments to the former St. Mary’s hospital just off Broadway. Not all of the six candidates agree with that and each addressed the idea of spreading the police department out through the city rather than one central location.

Eddie Mannis was the first to answer the question and said he believes that a precinct model is “a better way to go.” He said putting the police back in the community builds relationships and said, “That is a better model of policing and helps build a relationship.”

Indya Kincannon said she supports the community policing model and said that police officers should be paid better.  “When I talk to officers about recruiting more officers no one ever says we need a better building.”

“Police working in an area have the opportunity to get to know the people in that area,” said Michael Andrews. “You get better community input.”

Fletcher Burkhardt said he thinks the precinct idea “is great” but said it increases the cost. He also said the police and fire department employees need “proper pay” and to get rid of antiquated rule books. He said that he saw an officer who had to wear long sleeves in hot weather because of a tattoo on his wrist.

Calvin Taylor Skinner said that police officers should reflect the community in which they serve and called for more diversity and better mental health training. He said community policing is “helpful.”

“We’re doing that now with community meetings and building relationship with business owners,” said Marshall Stair. He added, “I’m not for the precinct model because the city of Knoxville is not that big. At this time when we’re understaffed I don’t think that makes sense.

Kincannon said her top priorities are families and community and having the city work for everybody.

Burkhardt said he is a fan of efficient government and that Knoxville should become the blueprint for the Southeast.

Stair said he can’t remember when Knoxville has been doing better and is proud of being part of that success as a council member.

Mannis said that Mayor Rogero has been doing a good job and the new mayor should build on that success. He said he has the executive level experience to do that.

Skinner said the city needs a vision as to who is part of the conversation to move the city forward where it could and should go.

The League of Women Voters are holding a forum for city council candidates Tuesday, July 9, 2019 at the Knoxville News Sentinel’s Community Room at 2332 News Drive beginning at 6:30 p.m.