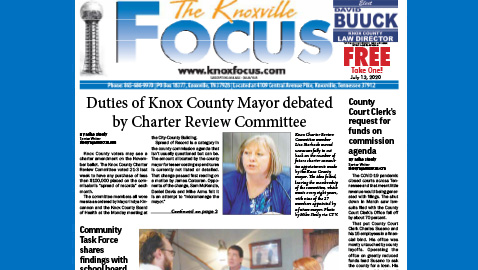 Knox County voters may see a charter amendment on the November ballot. The Knox County Charter Review Committee voted 21-3 last week to have any purchase of less than $100,000 placed on the commission’s “spread of records” each month.

The committee members all wore masks as ordered by Mayor Indya Kincannon and the Knox County Board of Health at the Monday meeting at the City-County Building.

Spread of Record is a category in the county commission agenda that isn’t usually questioned but can be. The amount allocated by the county mayor for lesser costing expenditures is currently not listed or detailed. That change passed first reading on a motion by James Corcoran. Opponents of the change, Sam McKenzie, Daniel Davis and Mike Arms felt it is an attempt to “micromanage the mayor.”

Committee member Jered Croom said about the amendment, “We’re going to have to do some explaining to the voter.”

In another discussion, committee member William Johns, while saying he supports Knox County Mayor Glenn Jacobs, made a motion to have future mayors serve “full time” without an outside occupation. He said there are “challenges and risks in having a celebrity mayor. Mayor Jacobs continues to be a professional wrestler known as “Kane.”

Asked what would happen if a mayor was detained in a foreign country, such as Saudi Arabia, Knox County Law Director Richard Armstrong said “the vacancy falls to the commission.”

Various committee members commented on the motion with Daniel Herrera saying it would “limit the mayor” and John Valliant asking if it was a “pressing problem,” adding that other former mayors had outside interests.

Armstrong said he, as law director, cannot represent anyone but the county but added he could have “a yard service job on the weekends.”

Johns said that Jacobs takes part in an “entertainment venue with a high incident of injury.” He was the only “Yes” vote in the failed motion.

In a long discussion of the future makeup of the charter review committee, Lisa Starbuck’s idea of limiting the county mayor’s appointments failed. Currently the 27 members include the nine Knox County Commissioners, one appointment by each commissioner, and nine by the Knox County Mayor. Each of the nine county districts have three representatives.

Starbuck said one-third of the body being appointed by the mayor unfairly tilts it toward the mayor. She and Evelyn Gill, Sandra Sexton and Croom voted for the change but 20 other members opposed it. The future committee, which meets in eight years, will remain with the current set up.

The makeup of the Knox County Commission was back on the charter committee agenda because a previous vote was ruled unacceptable. A 13-8 vote to keep the commission at nine districts and two at-large seats needed 14 votes to be legal.

“The majority of people don’t want a change,” said Arms.

The Charter Committee meets again today at 5:30 p.m. in the main assembly room of the City-County Building.