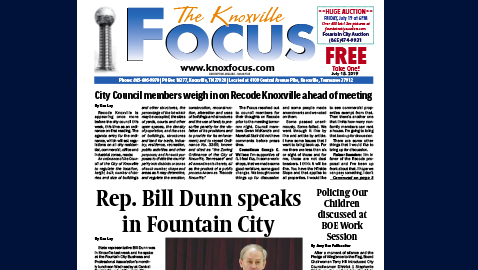 State representative Bill Dunn was in Knoxville last week and he spoke at the Fountain City Business and Professional Association’s monthly luncheon Wednesday at Central Baptist Church of Fountain City.

Dunn spoke about several topics including the controversy surrounding beleaguered house speaker Glen Casada, the Real I.D., the state of education and the flourishing economy in Tennessee.

He also took a few shots at the Beltway politicians.

“I’m in Nashville and not in Washington, D.C. Washington is dysfunctional,” he said. “I don’t care if you’re a Democrat or a Republican. What they’re doing is not good for America. I’m a state representative and I go to Nashville.”

The Real I.D. was a prevalent topic and generated several questions and Dunn used that as an example of Beltway inefficiency.

On Casada, Dunn had mixed views.

“Glen has great political instincts and he’s the Energizer Bunny. We had several freshmen elected and he worked on their campaigns and helped them get elected,” Dunn said. “But he used the politics and didn’t necessarily do what was right,” Dunn said. “Glen is a political animal, and that’s a term that he likes. But he used the politics and that’s what got him into trouble.

“Glen was voted speaker and that’s a very powerful position. You can hire people and you can fire people.”

Casada won’t have that power much longer. He’ll resign next month and Dunn will be interim speaker for the special session to elect the Casada’s successor.

He made it clear that he won’t be the next speaker.

“I’m not running,” Dunn said. “I was once a leader and God delivered me from that.

He also noted that the Casada controversy could have a lasting effect on Tennessee politics.

“I’m concerned because, sometimes people care more about ‘what’s in it for me.’ We have young representatives in Nashville and I’m afraid that they may feel like this is normal,” Dunn said. “Unfortunately for Governor [Bill] Lee, we’ve done some good things with the economy and some good things in education, but those have all been overshadowed by this controversy. “

He also spoke of the negative political aspect of social media.

“I like to be a positive person but social media can be negative in politics,” he said. “It used to be when somebody was concerned or upset, they would call and we could go through a bill,” Dunn said. “Now, it’s ‘I know what this is because I read it on the internet.

“You have a lot of group think and politicians post things that get ‘likes.’ They also don’t say things that they think will make people mad. I’m not on Facebook. I’m not on Twitter and I’m not on the front page and that’s a good thing.”