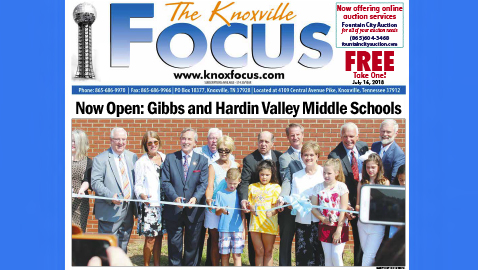 A Triumph of Convictions

Desire is one thing. Conviction is quite another. When Knox County officials cut the ribbon on the new Gibbs Middle School last Tuesday, it was much more than the dedication of a building. For the Gibbs community it was the celebration of a victory.

The opening of the facility marks the first time a middle school has existed in the Corryton zip code since 1991, when Gibbs Middle was closed as part of a system-wide desegregation plan by Knox County Schools. Although 27 years was far too long for Gibbs residents to endure its absence, the new state of the art building made some feel like it was almost worth the wait.

The new school is everything one could have hoped for; the first room one encounters after entering the building is the gymnasium. Spacious, fully equipped, and adorned with everything “Gibbs” including the giant ‘G’ on the wall, the gym is the crowning jewel of the school. But everything from the highly functional classrooms to the wide hallways to the massive auditorium is top shelf quality.

Walking the hallways it was hard to miss the pride in people’s eyes, not the least of which was community supporter and former school board member Steve Hunley, who led the fight for a new Gibbs Middle School the moment the original one was closed in 1991. It was Hunley’s resolve that kept the issue in the forefront of the community’s awareness for 27 years, as he worked tirelessly behind the scenes as well as in the public forum for a cause he passionately believed in.

That conviction included a strong sense of injustice felt by the community when its middle school was closed back in 1991. Although the move was purported to be necessary for a desegregation plan implemented by Knox County Schools, the closure of Gibbs actually resulted more in re-segregation. Holston High School, the most racially balanced school in the county, was closed as well to make way for Gibbs students to be bused to newly created Holston Middle. Opening with an over 80% White demographic, Holston Middle was never able to achieve the racial balance of its predecessor.

But despite the assertions of some outside the community, the fight to return Gibbs Middle School was never about race. As Hunley emphasized, it has always been about conviction. That conviction was never more evident than it was in Dave Wright. The county commissioner from the 8th District simply would not accept ‘no’ as a viable answer to the question of building a Gibbs Middle School. He wouldn’t accept ‘wait’ either.

At one of the preliminary meetings that ultimately led to the project’s approval, some in attendance suggested it might be better to wait a year or two to continue the fight in hopes that the makeup of the school board would change in favor of Gibbs. Wright’s response was clear and firm.

If Dave Wright was a rock of resolve, Mike McMillan proved to be an immoveable object. McMillan’s knowledge of the legislative process and political acumen helped him to skillfully guide the project to success, oftentimes in the face of fierce opposition. McMillan’s hand never faltered and he remained steady until the end.

The sense of urgency rallied the Gibbs community, as residents flocked to town hall meetings across Knox County expressing their support for the middle school. Parents rallied. Alumni rallied. Churches rallied. Prayers were offered. And the tide began to turn, capturing the attention of key school board members like Doug Harris. The representative from the 3rd District became the crucial swing vote that led to the board’s approval of the new middle school. But still, the question of funding remained unanswered.

That’s when Mayor Tim Burchett stepped to the plate. Burchett and his staff worked with members of the county commission and the school system, and found a way to fund the construction of new middle schools in both Gibbs and Hardin Valley.

The ribbon cutting was an event befitting the tenacity and faith of the community, which turned out in overwhelming numbers. Director of Schools Bob Thomas opened the ceremonies by introducing Principal Cindy White. It was Ms. White who received a warm, welcoming ovation from those gathered, as her leadership since being named the school’s first administrator is already having an impact on the culture of the community.

Ms. White then yielded the podium to school board member Mike McMillan, whose role in the building of the new middle school cannot be overstated. McMillan likely received the loudest applause of the ceremony, which is fitting considering how pivotal a role he played in making the new Gibbs Middle School a reality. Mike McMillan’s remarks were brief, gracious and self-effacing.

The last speaker was Mayor Burchett, who as he always does, deflected the credit to others.

“I’m just the guy that gets to fall across the goal from the 1-yard line,” he quipped. “You folks took this the other 99 yards.”

But it was the words of Commissioner Dave Wright that captured the spirit of the day perhaps more than any others.

“When I got here this morning,” Wright said, “I didn’t know how big the crowd would be, so I parked down the hill at the elementary school. It took me less than two minutes to walk up here. Along the way I thought about how what used to take a 45-minute bus trip can now be done in a 2-minute walk.”

Amazing what 27 years, and a whole lot of conviction can do.