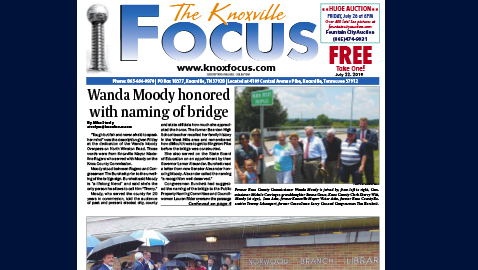 “Tough but fair and never afraid to speak her mind” was the description given Friday at the dedication of the Wanda Moody Overpass on North Winston Road. Those words were from Knoxville Mayor Madeline Rogero who served with Moody on the Knox County Commission.

Moody stood between Rogero and Congressman Tim Burchett prior to the unveiling of the bridge sign. Burchett said Moody is “a lifelong friend” and said she’s the only person he allows to call him “Timmy.”

Moody, who served the county for 20 years in commission, told the audience of past and present elected city, county and state officials how much she appreciated the honor. The former Bearden High School teacher recalled her family history in the West Hills area and remembered how difficult it was to get to Kingston Pike before the bridge was constructed.

She also served on the State Board of Education on an appointment by then Governor Lamar Alexander. Burchett read a letter from now Senator Alexander honoring Moody. Alexander called the naming “a recognition well deserved.”

Congressman Burchett had suggested the naming of the bridge to the Public Property Naming Committee and Councilwoman Lauren Rider oversaw the passage of the name.

Now 88 years old and an active member of the Bearden United Methodist Church, Moody was a Karns High School and UT graduate and, among other things, served on the Transportation Regional Planning Organization.

Congressman Burchett said Moody was a great help in his first run for Knox County Mayor.

“I appreciate you, congressman, and you mayor, for being here and all the former office holders who I’ve worked with for many years.  I really appreciate this,” Moody said.

“It’s good to see all of you and thank you,” she concluded.

The crowd followed Moody, Rogero and Burchett to the sign and then grouped together as city, county, and other elected officials for photos of the honored former county commissioner.