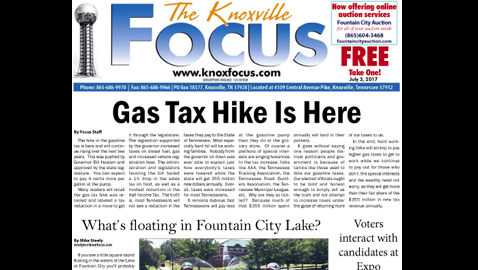 The hike in the gasoline tax is here and will continue rising over the next few years.  This was pushed by Governor Bill Haslam and approved by the state legislature.  You can expect to pay 4 cents more per gallon at the pump.

Many readers will recall the gas tax hike was re-tooled and labeled a tax reduction in a move to get it through the legislature.  The legislation supported by the governor increased taxes on diesel fuel, gas and increased vehicle registration fees.  The administration and legislators favoring the bill hailed a 1% drop in the sales tax on food, as well as a modest reduction in the Hall Income Tax.  The truth is, most Tennesseans will not see a reduction in the taxes they pay to the State of Tennessee.  Most especially hard hit will be working families.   Nobody from the governor on down was ever able to explain just how everybody’s taxes were lowered while the state will get 355 million new dollars annually.  Overall, taxes were increased for most Tennesseans.

It goes without saying one reason people distrust politicians and government is because of tactics like those used to hike our gasoline taxes.  Our elected officials ought to be bold and honest enough to simply tell us the truth and not attempt to increase taxes under the guise of returning more of our taxes to us.

In the end, hard working folks will scrimp to pay higher gas taxes to get to work while we continue to pay out for those who don’t; the special interests and the wealthy need not worry, as they will get more than their fair share of the $355 million in new tax revenue annually.