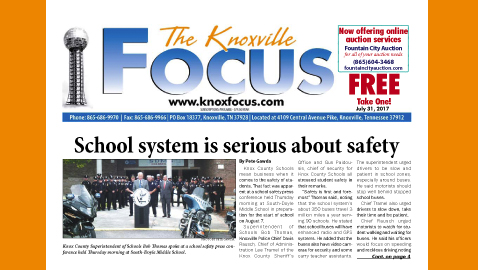 School system is serious about safety

Knox County Schools mean business when it comes to the safety of students. That fact was apparent at a school safety press conference held Thursday morning at South-Doyle Middle School in preparation for the start of school on August 7.

“Safety is first and foremost” Thomas said , noting that the school system’s about 350 buses travel 3 million miles a year serving 90 schools. He stated that school buses will have enhanced radio and GPS systems. He added that the buses also have video cameras for security and some carry teacher assistants. The superintendent urged drivers to be slow and patient in school zones, especially around buses. He said motorists should stop well behind stopped school buses.

Chief Tramel also urged drivers to slow down, take their time and be patient.

Chief Rausch urged motorists to watch for student walking and waiting for buses. He said his officers would focus on speeding and reckless driving noting that in the first two weeks of the last school year his officers issued over 800 citations in school zones.

Paidousis stated that the partnership between his school system and local law enforcement is a model for other school systems to follow. “We stand ready to maintain a safe learning environment,” he pledged, noting that there are uniformed security officers at every school. “We are fully prepared to protect our kids,” the security chief vowed.

To emphasize safety, the speakers were surrounded by parked motorcycles from the Knox County Sheriff’s Office and the Knoxville Police Department as well as uniformed officers from the police department and the school system’s security division.