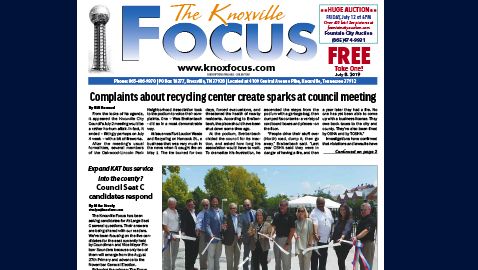 From the looks of its agenda, it appeared the Knoxville City Council’s July 2 meeting would be a rather ho-hum affair. In fact, it ended – fittingly perhaps on July 4 week – with a bit of fireworks.

After the meeting’s usual formalities, several members of the Oakwood-Lincoln Park Neighborhood Association took to the podium to voice their complaints. One – Wes Breitenbach – did so in a most demonstrable way.

At issue was Fort Loudon Waste and Recycling on Hancock St., a business that was very much in the news when it caught fire on May 1. The fire burned for two days, forced evacuations, and threatened the health of nearby residents. According to Breitenbach, the place should have been shut down some time ago.

At the podium, Breitenbach chided the council for its inaction, and asked how long his association would have to wait. To dramatize his frustration, he ascended the steps from the podium with a garbage bag, then dumped its contents – a variety of cardboard boxes and pieces – on the floor.

“People drive their stuff over (North) road, dump it, then go away,” Breitenbach said. “Last year OSHA said they were in danger of having a fire, and then a year later they had a fire. No one has yet been able to come up with a business license. They owe back taxes to the city and county. They’ve also been fined by OSHA and by TOSHA.”

Investigations have confirmed that violations and lawsuits have plagued the company for years.

“The city hasn’t given us a plan,” Breitenbach said. “We’ve been asking for a plan for when this is gonna get cleaned up. If you look at the regulations by which the city requires a business to operate, they’re in violation line by line of every single one with the exception of one, (which is) they haven’t blocked the roads.”

“We are obviously aware of the concerns of the neighborhood, the complaints that they brought here today,” she said. “Our law department and inspections and fire department operations chief have been working on that issue. There are processes (you have to go through) when a business owes back taxes.”

“OSHA has their own rules and regulations. We are concerned about the effects on the neighborhood, and we’re doing all we can to make sure the cleanup goes properly.”

Rogero acknowledged the residents’ right to be frustrated.

Early in the meeting Rogero announced that Draft 5 of the Zoning Ordinance (Recode) submitted by council and the planning commission will be on the agenda of the council’s July 16 meeting.

“It was discussed and amended at special-called council meetings on May 14 and May 30, then postponed for over six weeks to give the public time for review,” she said. “After the July 16 meeting, the next chance to review, amend and vote is July 30.”

The summary can be found at recodeknoxville.com

One of the resolutions approved authorized Rogero to “execute an agreement with CDM Smith, Inc. for amount not to exceed $362,375 for design of Phase II of the Northwest Greenway Connector Project.”