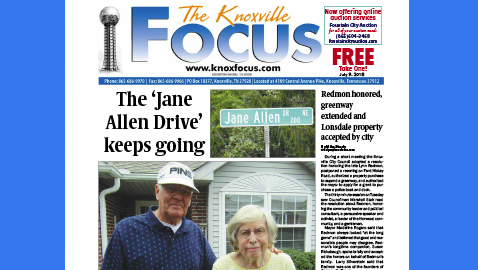 Someday, when you’re driving north on Broadway past Historic Fountain City Lake and the duck pond, slow down as you near Fountain City Wrecker Service on the right.

At the next turnoff, notice the street sign: Jane Allen Drive. It used to be Brief Road, but was renamed about a year ago, at the request of Glenn Allen, Jane’s loving husband for going on 59 years.

His reason given to the Metropolitan Planning Commission and City of Knoxville for the change:

“To honor and pay tribute to a lady who has served Fountain City and the City of Knoxville for over 55 years,” stated Glenn in the application dated June 1, 2017.

He also went on to add that his wife had been selected as Fountain City Woman of the Year (1995) and was given the Knoxville News Sentinel Community Cornerstone Award (2000).

“Mrs. Allen also served on the Board of Zoning Appeals and the Tax Equalization Board for the City of Knoxville under former Mayors Victor Ashe and Bill Haslam,” stated Glenn.

That road is still short and brief, but the life of the person it’s now named after has been long and physically challenging, yet filled with much caring and giving.

In addition to her work for the mayors, there were times when Jane Allen used to pick up Sarah Moore Greene, well-known Civil-rights pioneer, educator and community leader in Knoxville, and give her a ride home, said Glenn.

“We had a friendship,” said Jane. “She was getting up in age and I wanted to make it easier for her.”

Some years later, however, weak from chemo treatment she was taking for cancer, Allen fell and broke her neck.

“She can barely walk with a walker,” said Glenn this past spring. “I bought a new car to make it easy for her to get in and out.”

Now at 84, Allen may not be able to get around on her own like she used to, but her mind is sharp, her personality sweet and charming and she still gets out and goes places with friends as well as Glenn.

St. Paul United Methodist Church may be her favorite destination. It’s located on Garden Drive, just a quick, left turn off Jane Allen Drive that many folks use for a short cut.

“About 1964, I asked a neighbor about finding a small church,” recalled Jane. “I thought it was important to start Nancy (her then 4-year-old daughter) in church and I really needed it. I’m so thankful and blessed to have started at St. Paul, where I joined United Methodist Women, became chair for Helping Hands and taught the children in Sunday School.

“My church has been an important, vital part of my life! I wanted to serve and became a member of the women’s group and became involved in Missions. I love my church and church family so!”

Jane is still able to continue her “card ministry,” which she started years ago. She loves sending birthday and anniversary cards, get-well wishes and announcements of wedding and baby showers. She also sends Christmas and Easter cards to “shut-ins.”

Just last Thursday morning, while Glenn was playing golf at Whittle Springs, she was at home in their condo off Cedar Lane, sending out birth announcements of a new addition in her family.

The Allens’ granddaughter and grandson-in-law, Elizabeth and Daniel Reese, had brought their first child into the world at Germantown Hospital near Memphis on June 26. Her name is Nora Jane Reese.

That, of course, brought a smile to Jane Allen’s face.

Glenn would return home later in the afternoon and prepare dinner for the two as he usually does.

“When Glenn shared about his street sign project last year, he told how long he had been working on it but didn’t think it was going to happen,” Jane remembered. “I told him the important part was that he tried. He never cared for meetings and such but worked so diligently.

“What an honor and tribute – not deserved but so appreciated!”

It’s fitting too that they picked ‘Drive’ for the new name. Jane Allen has been through so much but had the drive and determination to keep going.